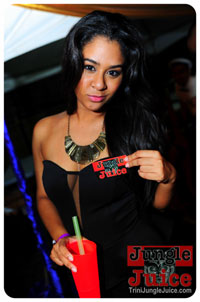 Honestly, if there is one all inclusive I am always excited about, it's Central Bank's. For those who are unfamiliar with this event, jus think about this scenario... partying in the streets in the heart of the city of Port-of-Spain under the moonlight carpet. Being entertained by for favorite Carnival artistes for the season, and drinks and food all to your disposal. What more can you ask for. It almost feels like a more civilized Carnival Monday and or Tuesday.... but that's just me.

Anyway, as mentioned earlier foods were in abundance and the varieties were all delicious. Myself and the other juicers couldn't control our thirst and appetite so we had to dig in to every food tent's contribution and sip on all the drinks available. For that, we at TJJ give the food and drink services two thumbs up. However, we would recommend setting up bars closer to the action or along the sides of the street with the main stage. This way party goers don't have to take their eye of the performances when ready to grab another drink, keeping the vibes pumping.

The live performances brought nothing less than satisfaction and greatness. From the energetic and enthusiastic Kes and his band, to the crossover chutney band of Karma, to the grooving sounds of Roy Cape All Stars with their front man Blaxx; who did nothing less than entertain the crowd and re-assuring them of his foreseen victory in the groovy category at the Soca Monarch finals. 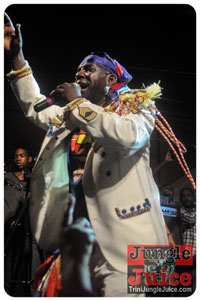 Blaxx also had a little surprise for patrons. Well I shouldn't say surprise but more of a friend he felt the need for us to fall in love with as we did long ago. Coming on stage to join Blaxx like he never lost any of his stage presence when last saw him was the high priest of soca Super Blue. This was the highlight of my night because since the beginning of this season I've been hearing nothing more than great reviews from his past performances at events, and to now see him in person for myself.... speechless can't sum up my reaction to how well he worked the crowd after being away for ten years. SUPER YOU STILL HAVE IT!

Once again Central Bank brought forward a great event for the season. For those who have never been to this should definitely put aside their financial resources to attend because believe me you are sure to leave there happy. The Jokey Juice rates it... on to the next event.