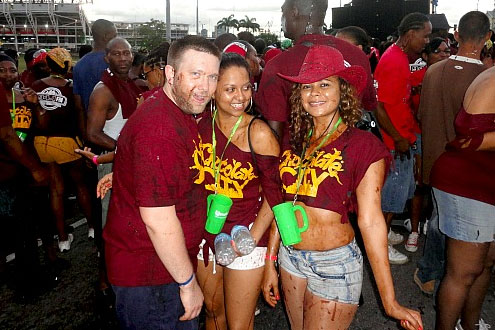 Port-of-Spain, Trinidad. February 1, 2013 -- With carnival merely a week and a half away, one J’ouvert band is ready and rearing to go. The streets are calling- this according to Chocolate City bandleader, Zarin Morean who is excitedly welcoming new and old patrons to the band. He says registration has been going well and vouches strongly for the high level of enjoyment masqueraders will be privy to on J’ouvert morning this year.

Over the years, Chocolate City has offered J’ouvert lovers something worthwhile. Chocolate is the main ingredient used in attracting masqueraders but mixed with a strong dose of fun, an all-inclusive package which delivers an unbeatable premium bar, tasty breakfast and a cast of 94.1FM DJs and radio personalities, the overall experience has continued to receive the support of many with rave reviews. “We sell that ‘differentology’ that Bunji speaks of in his song. It’s something really different- something that puts every masquerader in a zone that makes them forget the stresses of life and for one morning- in the wee hours of that morning, to just chip their worries away,” said Morean.

The band is a favourite for many visitors coming in from abroad. “There are people who aren’t into the mud, the paint etc, so we’re giving them a sweeter option,” said Morean. The concept has continued to work and with good service meted out to patrons, Chocolate City continues to prove that it is certainly a band that sets the pace in J’ouvert.

This year, the band is themed Total Recall and with that comes a few surprises, which will be revealed on the road come J’ouvert morning. All in all however, the band is ready to make every patron a happy patron on January 11. “We’re prepared to take our Chocolate City family on a really fantastic journey with the best music from years gone by to present. Total Recall is going to be a representation of where we came from and where we’re heading,” said Morean.

Online registration is being accepted for persons coming in closer to carnival Monday. The band’s website – www.chocolatecitycarnival.com is maneuverable and even allows for online payment. “We don’t want anyone to miss this chance to play with Chocolate City in 2013. They’ll regret it and we don’t want them to,” he laughed.

For more on the band, check out Facebook.com- keywords- Chocolate City J’ouvert Band or visit www.etceterabuzz.com.