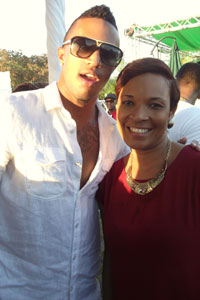 POS, Trinidad (Sonique Solutions) – The last stretch to the “greatest show on Earth” is always full of excitement and anticipation. For many feting connoisseurs Carnival Thursday is a special day as it is synonymous with the annual premium experience, the Bmobile-sponsored “Beach House”.

Produced by the group Beach House Entertainment, Beach House (which has an unprecedented following like no other Carnival week event) was held at a scenic location in Chaguaramas which not only afforded patrons a spectacular ocean view ambience but gave them to opportunity to literally walk from the fete into the sea.

This year Beach House was one of the many sponsored events on the Bmobile Imagine Nation Carnival tour and the mobile network pumped all its efforts into making this one of a kind day fete a truly unforgettable affair.

In addition to providing its trademark Bmobile lounge service as well as waving rags and cups for the fete’s guests, the network added cultural flair to the event by supplying a live rhythm section to greet arriving patrons and several branded umbrella tents for those patrons seeking to beat the scorching day sun.

This ultra-inclusive fete offered a vast artillery of food and drink stations which basically catered to every culinary and beverage desire.

When the excitable patrons were not socializing or being pampered by the fete’s premium service, they were seen partying away to the excellent juggling and Carnival music mixes presented by the fete’s all-star DJ line up.

Even with the arrival of competing events in its timeslot, Beach House 2013 showed the power of its brand and boasted several local attendees as well as those who hailed from different parts of the globe e.g. England, Germany, Canada, Sweden and Australia who shared the unmistakable feeling of satisfaction which they felt each Carnival Thursday (an inexplicable feeling which keeps them coming back to Beach House, year after year).

Photo: Bmobile endorsee Njisane Phillip poses with a fan during the festivities.