By Sidney aka Scorn Juice
Published on 03-Feb-13
As we leave Fatima All Inclusive, we are haunted and maybe anxious, some of us even battered and beaten, and we need another party to induce our Carnival Enjoyment tonight. Where to? We shall head to Queen's Royal College for NEON. Third time for this event and we hope ...
>> View NEON YUMA's Drinks Inclusive 2013 Gallery
>> View Trinidad & Tobago Carnival 2013 Coverage 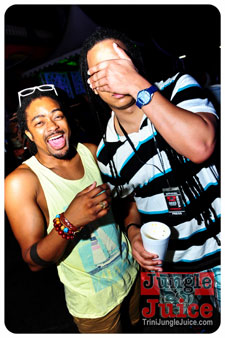 As we left Fatima All Inclusive, we are haunted and maybe anxious, some of us even battered and beaten, and we needed another party to induce our Carnival Enjoyment tonight. Where to? We shall head to Queen's Royal College for NEON. Third time for this event and we hope to have a fantastic time!

Something is wrong ... We need to have a re-evaluation of NEON! Last year it was the layout of the college grounds and this year they rectified that situation somewhat with the movement of the stage, however, the movement of the bar to the centre of the party ... lacking enthusiasm and imagination we believe!

A party becomes iconic, beloved and imitated when it can be described as no-nonsense simplicity! Nevertheless, NEON 2013 seems to complicate things too much with the layout of the venue once again! Maybe, just maybe, the college grounds seems to be a "blight" venue!? This being the third successfully attended installment, this franchise still maintains the flaw of venue choice as it is magnified as soon as you enter!

It is also very evident that Carnival parties also have their crowds well tailored made that is, coming from Fatima All Inclusive to NEON, the change in crowd and mostly change in generation is very evident and also very welcomed.

Being a drinks inclusive event, the bar plays an important part in this event and as a result, as mentioned before, Yuma needs to work on the location of their bar. That central position was definitely not acceptable however, people made it work. 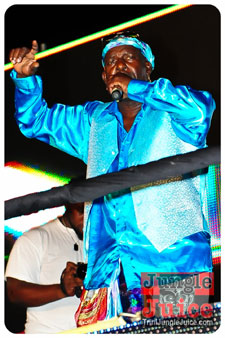 That notwithstanding, the element of surprise and the element of vibe still has power in NEON. Performances from Iwer George, Destra Garcia and the immaculate and entertaining Super Blue who by the way received an encore as if he was performing in a Calypso Tent, all provided high first class entertainment tonight. With examples of people, holding onto to poles and wining, people testing their knee & thigh strength by wining low as possible and last but not least the estranged rasta man bouncing on the concrete as Super Blue performed his road march wining title "Fantastic Friday", it without a doubt was entertaining and NEON had vibe present. With the music for 2013 also being much better than 2012, mainly due to the fact of more power soca, the DJs present had a splendid time entertaining the patrons and blasting tune after tune through the speakers. We must report though ... at times ... at times ... people were having conversations in the party longer than the usual time allocated for socialising in an event!

Maybe we need a shot of adrenaline after the performances, but what we think could have been epic and offered star power, dashes of dazzle and plenty alcohol, it lacked that final hair raising thrill. It is also quite entertaining, to have that final party end conversations with the police officers who were ushering patrons off the grounds and saying "hope you have a designated driver, we looking to lock up people tonight!".

Verdict:
"That Was Hilarious", says a patron;
"Would You return?", asks party guru;
"Maybe, not sure yet!" says patron.