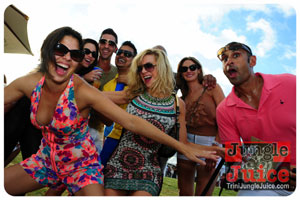 Stranger things has happened in life that make you wonder why oh why did this happen? Murphy's law may enter your cranium and tell you oh that's exactly how it should be; but when we were told that Beach House is located in Chaguaramas, the following thoughts entered - traffic, get early, pace, do not make any sudden bad decisions! Moving early to this event should never be a thought missing, it should be as easy as knowing to take off your clothes to use the bathroom. Some patrons even stopped off by the shops and started the party early as the one road in one road out stretch into Chaguaramas does encourage drinking! 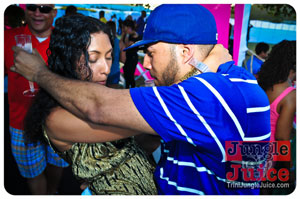 Unlike earlier myth-making takes on all the beloved all inclusive parties in Trinidad at Carnival 2013, Beach House presents an atmosphere that challenges to even the most god fearing person's morality! This event does not use chicanery to engage patrons in euphoria and it becomes a monument in any attending patron's carnival itinerary! The outcome is a tense but sexy immersion of people eating, drinking and dancing all in the name of celebrating life and basically "releasing" themselves into the air! 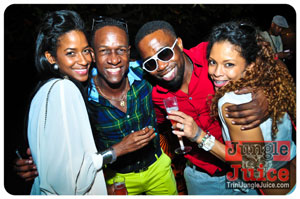 This new venue was definitely a hit and has the likings, blessings and espousal from almost every patron who attended! The DJ booth smack at the end on the shore and around the perimeter all the main bars interchanging with special bars complete with the food located in one set location but easily accessible provided what we believe was the perfect layout! Now, just as last year, the bars did not fail to deliver! What one can only describe as top notch service, ask for your poison ... one shall receive! The Food ... oh my days ... The Food ... oh my days ... The Food ... OH MY DAYS! Out Done! Out Classed! Diabolically Tasty! Fiendishly Fulling! Made you want to go back for more and more and more ... Much respect for the crab and dumplin and the pulled pork! Maybe I should not have eaten so much ... Alcohol could not get through? 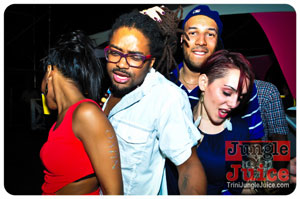 Patrons at this event seem too engrossed in its rhetoric ehphoric atmosphere and maybe at times the defiance of disappointment may have been useful as the emotional and comic jolts of excitement struck as can constantly been seen by the numerous hands waving in the air, the number of bodies elevated on other bodies and finally, the sharing of gyrating waistlines! Every year Beach House manages to do this, always manages to have energy and entertainment without a stage performance. The secret is maybe in the pudding as some old folks may say! They have the success. They have the skill. They are winners !!! 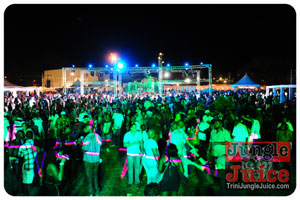 As a result, we can’t fault a single performance from the Disc Jockeys at Beach house; yes maybe they were blessed with an abundance of excellent soca songs for 2013, but the play lists and chosen speeds and timings to release each musical track was first class second to none! Granted, there’s always a time in any event where patrons may need to take a break, Beach House provides that balance between relaxation and non-stop action with ease and no effort whatsoever! Nonetheless, Beach House should not seem to be so personal to patrons, maybe its the price tag, but yet it will always be so momentous to anyone who attended!

Verdict:
Steeped in sexiness, disappointed by none, loved by many, Beach House Carnival 2013 was thrilling and described eloquently and directly what an all inclusive should be. We will never leave ...