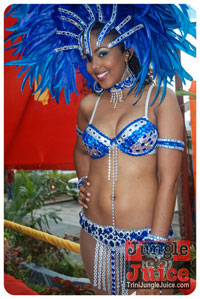 Before I start, I have a confession (not a soca confession). I am somewhat inclined to any event that serves frozen margaritas. Woo sah; my conscience is cleared, now on to my review. On Sunday 27 January, Karamboulay Kreations hosted their 7thAnnual All Inclusive entitled “De Elements of De Fire”. The event which has become a staple on the South Trinidad’s Carnival Calendar was held at the Twin Walls Compound, La Romaine.

One of the key factors of the event’s success was space. The Twin Walls compound allowed for smartly placed bars and an expansive food court away from the main party area. The wide assortment of drinks available at the several bars can be considered the major winner of the event. I have noticed that a few of similarly priced all-inclusive events have reduced their drink offerings, but this was not the case on Sunday. Frozen Sauza margaritas, Grey Goose martinis, champagne, wine and over seven types of beers, were just some of the many drinks items available at Karamboulay Kreations’ De Elements of De Fire.

Adding to the experience was the food court which offered an array of local and international cuisines. Maybe it was a play on the theme but coincidentally many of the food items included hot pepper in some form: pepper chicken, pepper lamb, pepper fries, pepper shark and ever popular, pepper roti. One cannot go to a Karamboulay Kreation’s event and not have pepper roti. Madness! 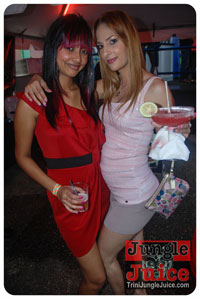 As the sun began to set, Destra with her band graced the stage along with TC, Shal Marshall and 5 Star Akil and gave an exciting and very solid performance. Patrice Roberts, Adesh Samaroo and Karma formed part of the event’s line up. Also, patrons were treated to tassa, rhythm section, pan, blue devils, fire breathers and jabs jabs which captivated (and startled some of) the partying patrons. This was indeed a nice touch as it added to the overall theme of the night.  One of my entertainment surprises for the night was Sally Sangram and her band Extreme. I knew little of the band before this event and was impressed with their presentation. Another welcomed surprise, were the DJs that actually played many of the soca on the radio. You would not believe how rare this is in many parties. Many DJs have about twelve songs on the repeat for the night. This I admit was refreshing.

Overall, the large space, the wide assortment of drinks and food and great entertainment all contributed to the Karamboulay Kreations’ success. How do know when an event is a success? People does be sweaty and do not want to go home.