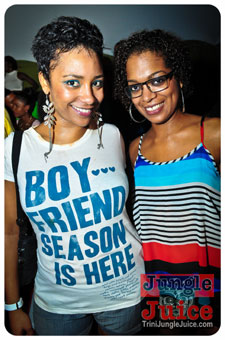 A cooler fete during the Trinidad Carnival season is definitely something any human should attend and mark off their bucket list. Blue Range cooler fete for years has been a stable event for many years on Carnival Friday and has often cause disturbia for people to decide between the Range and Girl Power. What makes this even so "special"? We never fully understand it however, we may have finally some insight on its prowess!

Any event where you can bring your own liquor will always sell off! What? We do not need a bar! Sell Off! Maybe for ice? For those who needed ice at $ 5.00 TT for a cup of ice ... RIDICULOUS!

Location! Location! Blue Range tennis courts have been the beating grounds for this event and still remains an ideal party venue! Simply rectangular and all ammenities on the perimeter, then yes venue is on point! However, parking for this event seems to be giving trouble! I am not quite sure it could ever be solved but there were too many restrictions and the shuttle service was apparently really far. Advice, create your own parking spot!

With the lack of need for a bar, and with a food stall on the premises, one can easily acquire food when the belly goes grumbling. The chits system should be abolish and banned for life by the Government of Trinidad & Tobago! It is pure robbery! 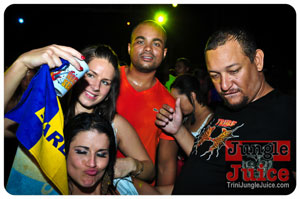 Performances by Lyrikal, Yankee Boy, 5 Star Akil & the Viking Bunji Garlin ensured that Blue Range Cooler fete was mostly non stop pace! Private Ryan & Jase encouraged wildness and more so than ever debates for Road March & Soca Monarch. This has to be the best for the entire season that we have seen Bunji perform individually. Much respect for the big up to TriniJungleJuice in one of your numerous freestyle verses of Differentology. Bunji was called back on stage for an unprecedented four (4) times as an encore. The crowd could not get enough of Mr. Alvarez. Literally, from the woman at the front of the stage handing him alcohol to shot, from him even grabbing the bottle as well and pouring what has to be the longest shot in history (Guinness, check your records!) and finally Bunji exclaiming that if he was in Soca Monarch not even Fay-Ann, Super Blue or Machel would have won the crown!

For what seemed to be an endless crowd of sexy people enjoying life and throwing anything they could find into the air, Cooler Fete @ Blue Range was an organised, cagey yet loose affair and just maybe we shall return! Ideally, you know your party is a good one when females are wearing sneakers to attend your party ... because they know ... is all about the running away, the letting go, and BOUNCING!!!

Verdict:
For the young and free at heart and mind; all the party hard crew; and most significantly, come with your crew and cooler and you will have a party!