By Tuere aka Teekay
Published on 07-Feb-13
Carnival Thursday we headed to the beach, not to wind down but to wine up at the second installment of C’est La Vie all-inclusive. The breathtaking ambiance was enough for us to be impressed upon entrance and things kept getting better from ...
>> View C'est La Vie All Inclusive 2013 Gallery
>> View Trinidad & Tobago Carnival 2013 Coverage 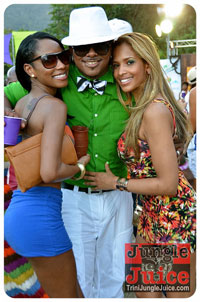 Carnival Thursday we headed to the beach, not to wind down but to wine up at the second installment of C’est La Vie all-inclusive. The breathtaking ambiance was enough for us to be impressed upon entrance and things kept getting better from there. This being my first time at the event and having heard rave reviews about the 2012 edition, I had high expectations and these were all met if not exceeded.

The venue was perfectly nestled between the lush hills of the Northern Range and the relaxing Maracas seascape. This combination helped us to immediately abandon any stress that may have accompanied us on the maxi ride up and go straight into pump mode. On entering the party we were greeted with a sample of the wide variety of delicious food options available including stuffed crab backs, crab and dumplings and lobster corn soup. There were also strategically placed bars from the first step into the party, so instant vibes!

The promoters definitely used the tiered layout of the venue to their advantage and as we descended the hill we were greeted by a huge dance floor and more well stocked bars on the second level and finally we entered food heaven on the lowest level. 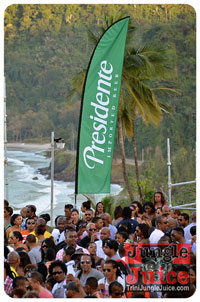 We arrived at the party with our bellies in hand so the food court was definitely our first stop. Thankfully the lines were flowing so we didn’t have a long wait as we filled up on geera pork, pholourie, saheena and BBQ pork ribs. We perused the other stalls and noticed the jerk chicken and bake and shark among other delicacies but we had to save some room to hit the bar.

There were well-staffed bars on every level of the party so getting drinks was never an issue. We were able to top up on our bubbly and Johnny with no issues and the bottles of Punch Punch passing through the crowd kept us happy between drinks, we even tried Punchy Punch mimosas! Yummm!

With full bellies and drinks in hand it was time to spread our hands and let goooo! We headed to the dance floor where the DJs including X-Caliber kept patrons wining low with the C2k13 anthems and even some throw back tunes. The crowd loved every minute of it! Dressed to the nines, partiers of all ages showed that like the song goes, dey does party hard! We were even treated to several performances including one by Patrice Roberts. 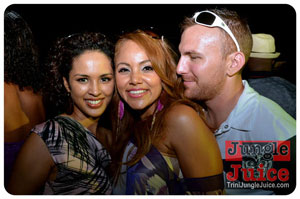 One of the most notable and impressive things about C’est La Vie was that food never ran out and drinks were never rationed. The promoters obviously did an excellent job of catering for the estimated crowd and that always leaves feters feeling like they got their money’s worth. Though things started winding down promptly at 8pm, the party still continued and there were doubles and water readily available for those who needed to catch themselves before the drive back to reality.

We give C’est La Vie two thumbs up! From start to finish we had no complaints and an awesome time! This is definitely one to add to our carnival line up for C2k14.

-Teekay for the TJJ fam