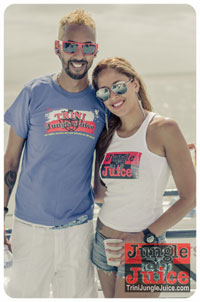 CHEEZEON BREAD ... T&T’s introduction to the Barbados' Ultimate BOOZE CRUISE did not disappoint it was ‘toppa tops’!

For a seasoned booze cruiser whose 2012 Crop Over wasn’t the same without the Harbour Master, I felt like I died and went to BOOZE HEAVEN once the boat set sail. The blazing Trini sun on the upper deck, the fresh sea breeze, the sexy people, the mix of Trini and Bajan Soca to Wuk Up to, who could ask for more?

Lunch was available from the time you boarded the boat and pretty much the entire cruise, nice choices too including steak and BBQ, we didn’t go hungry at all; even when we docked there was corn soup and doubles waiting for us. Drinks like water are you would expect from a Booze Cruise. There was the obligatory Jaegermester and Café Patron being poured down your throat, neck and boobage. But  people, where was the rum cask and the Rum Punch?? We neeeeed Rum Punch next year!! Correk! 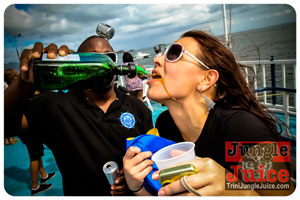 The Dj's (Salt & Don and Mali & Scott) did a good job keeping the vibe pumping, especially hype man Patrick of Nuphoric sound ... he could get ah crowd going. There was lots of free bumsee passing when d Bajan tunes were being played, and boy did we all 'Spread Our Hands' (and other body parts) and "Leh Go"! Some would say the highlight were the live performances by Inches, Lil Rick and Skinny Fabulous, I say NO. It was the bacchanal Inches, Rick and Skinny created when d boat docked, singing as the posh folks say ‘accapella’ style. Let’s just say security had to ask some of us to leave the boat. 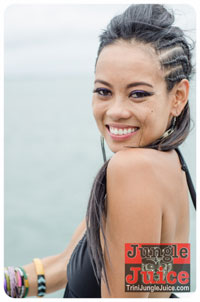 So people, if you weren't present... your loss. Shame on you if you didn't hear of the infamous Booze Cruise or was simply too lazy to wake up from whatever you did the night before. This was a cruise not to be missed ...  and just as it sells out every year for Crop Over, if they continue to deliver like they did this year (with the addition of the rum punch) there won’t be a spare ticket in 2014. Action!