Nurse Nisha delivers the cure for the common fete 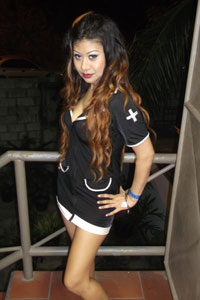 POS, Trinidad (Sonique Solutions) – Chutney-Soca princess Nisha B of the band Karma had a truly hectic Carnival 2013 with as much as 5 event appearances per night. This year the young singer has certainly shown the masses that much like her brother Ravi she can command massive audiences, deliver original crossover hit songs and offer her own unique ‘party prescription’.

In addition to garnering her fair share of radio rotation with her C2K13 hit tune ‘Wine Up Your Body’, her sizzling performance of the track in fetes sent several male audience members into a frenzy. Decked in a sexy nurse’s uniform among other sultry onstage numbers, Nisha touched down on several fete stages and at the recent events such as RAMA, A.S. Bryden’s fete and St. Anthony’s All Inclusive her mesmerizing moves motivated male patrons into performance mode as several of them climbed onto the stage to display their dancing abilities for the Chutney-Soca diva. 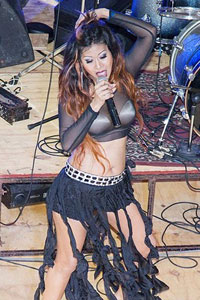 Most notably, much like her music repertoire, the very humble and hard-working Nisha has also seen an expansion in her brand. Recently, the East Indian beauty was signed as a local endorsee to international beauty product line Virgin Glam Hair. As one who always had an interest in fashion and beauty, she shared that she sees this product alignment as a natural fit for the Nisha B brand as she herself has many goals to accomplish on a global scale in the not too distant future.

As the T&T Carnival season has ended Nisha aspires to produce more original music in various genres and to continue to carry indigenous Caribbean music to various international borders throughout 2013.

Along with her brothers Ravi, Anil and the other members of the Karma family, Nisha anticipates taking the band’s fresh show on the road. With a renewed energy, a pumping song and a collection of eye-catching outfits Nisha B is set to fire up fetes and keep audiences moving for the entire 2013 and beyond.