By Dre aka The Carnival Ref
Published on 06-Feb-13
Been hearing about how great a Scorch cruise is for a hot minute now, and since ducking work is nothing new for Trini Jungle Juice, Carnival Wednesday we found ourselves at "_uck Work" Cooler Cruise, renamed by some as ...
>> View Scorch Duck Work Cooler Cruise 2013 Gallery
>> View Trinidad & Tobago Carnival 2013 Coverage 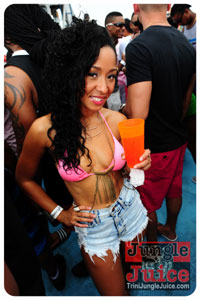 Been hearing about how great a Scorch cruise is for a hot minute now, and since ducking work is nothing new for Trini Jungle Juice, Carnival Wednesday we found ourselves at "_uck Work" Cooler Cruise, renamed by some as "Duck Ya Gal/Man" scheduled (key word ... scheduled) to set sail at 1PM.

CROWD:
Dance was RAM! However it definitely wasn't your typical Scorch crowd, or at least the crowd we always hear about. And with in the influx of foreigners for the season, it turned into somewhat of a "Man-o-Rama". 60/40 - Women/Men ratio is the minimum benchmark promoters! Have no fear, as you can always count on TJJ's Frenchie to snap pics of every woman he can seek out. Btw, he's also DTF ... Down To Fog! ;-)

VENUE/ACCESSIBILITY:
The cruise was sold out, so parking was a scene causing nuff traffic on the foreshore. In the end, everyone found a spot and boarded the Harbour Master for a late push off. The top deck was ram, and it appeared that the Scorch regulars enjoyed their cruise on the middle level with enough space for level jamishness.

VIBES:
Although most folks didn't truly have to duck work, it was nuff vibes on board the boat as coolers were filled with choice alcohol and chasers. Bumsee sharing was generous, but again, the men out numbered the smallies. However, when you add "Punchy Punch" shots and Puncheon ice lollies aka "Fire Stick" into the mix with Private Ryan taking the cruise home ... it's a wrap! And additional ingredients - powder to 'fog up d place' and a guest appearance by Yankey Boy performing big 2k13 track "Rumors" ... it's a gyro!

There you have it folks, my 2 cents for "Duck Work" as a first timer. At carnival time, its hard to keep an event in it's true form ... and this is a challenge I would like to see Scorch take on and win.