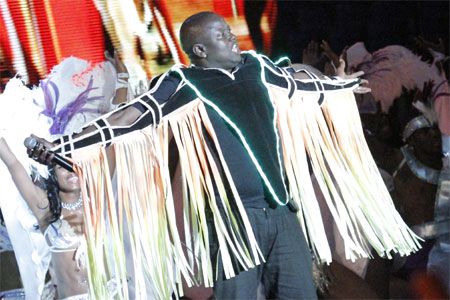 Port-of-Spain, Trinidad. February 21, 2013 -- Trinidad and Tobago entertainer Dexter ‘Blaxx’ Stewart is celebrating what he says he considers one of his best carnival seasons ever. Looking toward the rest of the year, Blaxx notes with favour, the strong embrace of the Soca music genre even after the Trinidad and Tobago carnival season has passed. “The music continues to be played on the airwaves locally, and for that I am happy. We have fought for that year after year, and to listen after the season here at home, and hear my music and that of the other artistes still on rotation, I can’t help but be happy,” he said recently.

Thankful for what he notes was a very successful run this past carnival, Stewart now moves to take his sound up the islands and around the Caribbean before jumping onto the international circuit, like most of the other Soca stars who will be heading to carnivals across the world. “There’s really no time to rest. The action has only just begun. I’ll be spending some time with my wife and family for a little bit but the bookings are coming in for the band and we’re happy about that. On a personal note, I’m really thankful for the support given to me by the general population- fans and critics alike. We had great music and we had unwavering support from Trinidad and Tobago and obviously people who came in from overseas- support that saw me to the finals of the Groovy Soca Monarch and into almost every major carnival event. I’m truly grateful and humbled by it all,” he said.

Going forward, Blaxx says his concentration will be on marketing himself harder and ensuring that the overall package he delivers to his audiences at home and abroad, is in fact a well presented package. “People want an artiste that can not just sing to them but entertain them visually and emotionally. I get that and I am promising that I’ll be working on that throughout this year and beyond. We all have to work on our individual selves and as a collective of Soca artistes to push this thing called Soca music through, so that the universe can be infected with its sweetness,” he said, with a high level of conviction.

“I really want to thank everyone for the love and support this past season and say on record that come 2014, Trinidad and Tobago will have a whole lot more to spread their hands to. We’re on a mission to give them the best and that they will get,” said the artiste.

Blaxx performs at fellow entertainer, Shurwayne Winchester’s children’s show in Tobago on the weekend, following which he’s off for performances in Barbados on March 2nd.