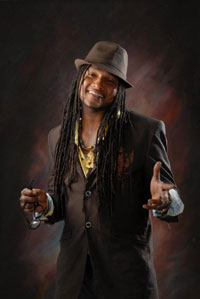 Port-of-Spain, Trinidad. February 22, 2013 -- On stage at Machel Monday, rising Soca star, Cassiano Sylvester- known best as simply Cassi, was referred to as the artiste who had delivered Montano’s favourite song for the 2013 Carnival season. Cassi says those words uttered by Machel himself, uplifted him in a way no one would ever understand.

He admits to having some difficulty penetrating at the start of the carnival season but is extremely thankful that his luck changed midway through the period. Now, looking back, the artiste who is preparing for a number of shows up the islands and internationally, says he is humbled by the reaction he received this year- the embrace by fans and the advice received from fellow entertainers.

On Thursday night, Cassi hosted his third annual friends and family after-carnival get together in collaboration with friend and motivator, international MC, Giselle The Wassi One. The engagement- while small and intimate, offered him the opportunity to relax and unwind with his fellow soca artistes, among them Blaxx, Shal Marshal and Lyrikal, among others. He highlighted that Blaxx was the first person to identify "Whistle and Horn" as the hit it would later become in 2013. Grateful to the veteran artiste, Cassi says Blaxx made him believe. Armed now with a better sense of musical worth and even more zeal to make bigger things happen in 2014 and beyond, Cassi says his next course of action is to continue with his vocal training while building on his character, image and understanding of the worldwide music industry. “My career has been a work in progress. I came from nothing and I am proud- really proud of where I’ve reached so far. I have to give thanks to every promoter who gave me a chance this past season- Cliff Harris, Roy Maharaj, Iwer George, Machel Montano, Tony Chow Lin On, Island People and everyone else. I also want to thank Angostura and Powergen for their continued support. There were people who stood with me personally as well- Anson George, Leonardo Worrel and Iwer George. To them, I am really grateful,” he said.

Cassi says in reflecting on his journey over the 14 years he’s been a part of the Soca music industry, he feels triumphant in 2013. He says he understands a lot more than he did years ago and expresses this sentiment to young entertainers. “Sometimes in our haste to be the next big thing, we don’t take enough time to absorb the right things. I have learnt by trial and error and it is no lie when people say you have to pay your dues. Nothing good comes easy. You have to work hard to get the best so no matter what you encounter on your road to discovery, keep going. Be humble and listen and learn. I’m still learning,” he said. Cassi performs in NYC on March 16th, following which he heads off to Barbados before hitting Toronto for Fire Fete on March 31st.