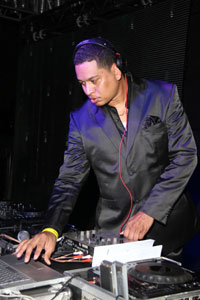 (Kingston, Jamaica – February 24, 2013) – It was with an assured confidence in his skills and his distinctive ‘hype man’ voice that DJ Dawg E. Slaughter unleashed his musical talents to a packed Mas Camp on Friday February 22. The Trinidadian deejay, who also goes by the name Mr. Slaughter, commanded the crowd to his every whim and fancy until well after the scheduled closing time of 2:00 a.m.

The night began with Renaissance disco’s DJ Smoke who played a smooth mix of past and present soca songs, warming up the then thin gathering. His selections included “Dance and Dingolay” By Denise Belfon, Bunji Garlin’s “So & So” and Kes the Band’s “Precision Wine”. At approximately 9:30 p.m., it was a smooth transition from one accomplished mixer to the next and DJ Slaughter immediately made it clear that he was here to live up to his name. The multi-talented deejay, artiste, producer and songwriter brought with him the true essence of Trinidad’s musical genre and blended past calypso and reggae-infused soca favourites with this year’s offerings including Super Blue’s “Fantastic Fridays” and “Fog” by Machel Montano, well-known hits from the current International Power Soca Monarch winners. Dressed in full black, Mr. Slaughter’s energy quickly permeated the entire venue until he had every waist whining, every foot jumping and every hand waving as patrons enjoyed his musical delivery.

Le Masquerade title sponsor Digicel made their presence felt with a special promotion and giveaways for bacchanal fans - a special double and triple bonus credit offer with the purchase of specified top-up amounts and free red and white waving rags which peppered the air to the beats of every song played throughout the night. Drink sponsors Appleton and Smirnoff also offered the popular Bacchanal Fridays’ drink special, the “mug deal”; for just $500, patrons received a sexy branded glass with up to five drinks free at any of their bars. Another of this year’s Le Masquerade sponsors, FAME 95FM, gave patrons their specially-blended cocktail, the Blue Diamond Mud Slide, which featured a mixture of Blue Diamond Almonds Almond Breeze Shake and Kirov vodka.

Decked in mardi gras beads in various colours from past carnival seasons, dedicated soca junkie, Harvel Wedderburn, was spotted having a good time in the all-inclusive VIP section. Wedderburn shared, “I missed the opening fete last week but this week was definitely not going to pass me. I had to be here because only carnival creates the atmosphere where I can have untamed fun. I just love carnival!” Also spotted enjoying the night’s revelry was the Hon. Phillip Paulwell, MP, Minister of Science, Technology, Energy and Mining.

Friday March 1 is when the Le Masquerade stage will be christened with its first band performance from Mr. “Differentology” himself, Bunji Garlin, along with his wife and soca diva in her own right, Fay-Ann Lyons (“Miss Behave”; “De Stage Open”). They will be backed by their energetic Asylum Band.