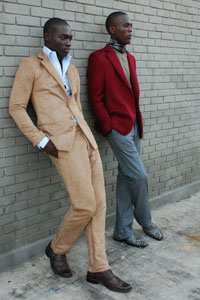 Millhouse Company’s 2008 Holiday Collection, Trafalgar, is a 1950’s English inspired collection that are a reflection of Millhouse Company’s designs, which are clean lines with the sophistication of European fit to Caribbean design.

English fashion designer, Romero Bryan also a part-time instructor at the London College of Fashion, began his career at the age of 12.  His designs have been worn by Kate Moss, Beyonce, Cameron Diaz, Victoria Beckham and Usher. He also was recognized and nominated in the Arts and Design category in 2002 by the Carlton Multi-Cultrual Awards.  In 2003 his talent was recognised by the Royal Bank of Scotland when he was listed as no. 5 in the Rich List 2020. Bryan, who is a graduate of the London College of Fashion began designing in his early teens, and received recognition at the age of 16 when singer/actress Samantha Mumba wore one of his designs to the Brit awards.

“We are very excited about our holiday collection this year and we are also honoured to be featured alongside designer, Romero Bryan, whose quality of work we have always admired,” said Coline Baptiste Mills, Designer, Millhouse Company.

Millhouse Company was founded in 1997 by menswear designers Gregory Mills and wife Coline Baptiste-Mills and is Trinidad and Tobago’s foremost men’s fashion design company.  Millhouse consists of two core divisions, which are ready-to-wear designer clothes and customized clothing. Their Clients include major local artists and personalities such as Anslem Douglas, Andy Narell, Imij & Company, Terry Seales and Jamie Thomas of MTV Tempo’s Rise and Shine programme.  Millhouse designs have been published in regional magazines Shabeaux, Caribbean Beat and SHE magazines.  They have also collaborated with New York based Trinidadian designer Charlene Sheppard-Duncan to outfit international celebrities including Musiq Soulchild, Mos Def, Jill Scott and Erykah Badu.  Presently, their fashion line is retailed in Trinidad and Tobago only, however, their Clients include residents of North America and several European countries.