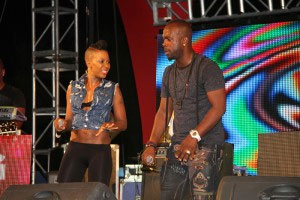 (Kingston, Jamaica – March 3, 2013) – It was to a jam-packed venue that Bunji Garlin and Fay-Ann Lyons performed on Friday March 1 at the first band night of Bacchanal Jamaica’s Fantastic Fridays. The powerhouse couple from Trinidad and Tobago commandeered the audience with hit after hit after hit to hundreds of dedicated and adoring fans from all across the Caribbean region.

The stage opened with a surprise performance from Jamaica’s own dancehall veteran, Lady Saw, who seduced the crowd with a sexually-charged version of her current hit “Heels”. Dressed in a white dress and red heels that matched her red hair, Saw accentuated her stint by calling on a gentleman and ordering him to lie on the stage. Not afraid of her raunchy side, Saw straddled the man, bouncing and gyrating on him while the strains of her song played in the background. This surprise performance readied the crowd for the main show and it was with great anticipation that Bunji Garlin entered the stage at approximately 12:30 a.m. With his undisputed and well-loved 2013 mega-hit, “Differentolgy”, Garlin stepped on to the Fantastic Fridays’ stage ready to deliver to his eager audience. Garlin shared that this song, “came about in roughly 20 minutes and developed from a natural mystic and the riff of an electric guitar.” The talented artiste, lyricist, songwriter and producer segued smoothly into another of his popular songs “Irregular” and the crowd responded by singing every word along with him. The perfect synergy was maintained as Garlin’s wife, Fay-Ann Lyons made her entrance felt with fan favourites including “Start Whining” and “Heavy T Bumpa”, a song for which she won Trinidad’s International Soca Monarch competition in 2009, becoming the first female to do so. Backed by the Asylum Band, the wife and husband team powered through their large catalogue of music covering Bunji Garlin’s “Runaway” and  “So & So” and Lyons’ “Consider it Done”, “Meet Super Blue” and “Miss Behave”. Lyons, who writes all her own music, said, “Inspiration comes from everything around me. When I write, I try to see how far I can push the envelope while ensuring that everyone at any level can enjoy the music, whether groovy or power.”

A special performance of Super Blue’s “Fantastic Fridays” by the duo followed the crowd’s chanting of “Super! Super! Super!”, and gave a nod to Lyons’ father stellar win at this year’s International Soca Monarch competition, after a 14-year hiatus. An energetic performer, Fay-Ann Lyons unified the crowd as they waved rags and flags on her command and created a large circle in the middle of Mas Camp, holding hands while they sang along to “Fantastic Fridays”.  Illustrating her point of true unity among Caribbean people, Lyons left the stage to join the circle and danced alongside some of her excited fans. The couple’s non-stop power set closed with an encore of “Differentology” and Garlin’s call to the crowd, “Vikings!” Musical juggling throughout the night was provided by DJ Richie Ras, a staple at Bacchanal Jamaica events.

The night’s excitement was heightened as Appleton, sponsors for the night, had their promotional girls fogging the crowd with smoke while standing on elevated lit boxes in the middle of the venue.  Appleton brought “something special” to the fete as they launched their new promotion “Ready for di Road”. To enter, fans are being asked to create an Appleton-inspired t-shirt design with the winner receiving a Le Masquerade costume sponsored by Appleton, access for 4 persons to Appleton’s VIP Road March float and other Appleton goodies. Le Masquerade title sponsor Digicel also brought out the fun and prizes for socaphiles with their dart game, allowing fans to win phones, call credit and Digicel t-shirts.

Fantastic Fridays continues on March 8 with Trinidad’s top female deejay, Duchess Alicia and Jamaica’s DJ Kurt “The Party Animal” Riley from FAME 95FM. DJs Titan VCD and Sanjay take over the turntables on March 15 with the first and only Bacchanal Saturday for the season on March 23, featuring Kes the Band.