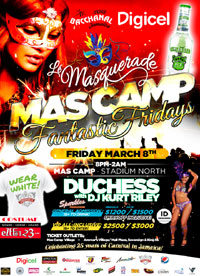 (Kingston, Jamaica – March 6, 2013) – Bacchanal Jamaica’s Le Masquerade season continues with an injection of female power as Trinidad’s premier lady mixer, DJ Duchess Alicia invades Mas Camp on March 8. She will be accompanied on the turntables by Jamaica’s own self-styled “Part Animal”, DJ Kurt Riley, in a night sponsored by Smirnoff.

“The Duchess” was born Alicia Awai in Trinidad and started charting her musical career at the age of 11. With the influence and tutelage of her brothers, Awai won the Fresh Fest Mix Master title twice in 1986 and 1987 at just 14 years old. Small yet energetic, this deejay didn’t allow her gender or size to sway her progress in the industry. She continued to develop her skills and build her credibility through a series of broadcasting gigs in her home country, and is now one of the most loved and popular deejays on Hott 93.5FM. Her broadcasting jobs included mentorship from Trinidad’s Tony Lee, and helped to shape and solidify the “Duchess” brand. Alicia D’ Duchess or DJ Duchess Alicia is not just a mixing guru when it comes to soca and has toured internationally to countries such as Canada, the United Kingdom, USA, Barbados, Antigua and many more to prove this. Warm and engaging, “The Duchess” will wrap you in her selections and style, with her singular female touch, leaving you begging for more.

DJ Duchess Alicia will be joined by top local deejay and confessed soca lover, Kurt “The Party Animal” Riley. Riley can be heard in the afternoons on FAME 95FM and is a staple at some of the best parties in Jamaica. Riley is the son of late songwriter and producer, Winston Riley, from whom he developed his love for everything music. With music all around him, Kurt Riley started developing his undeniable skills as a teenager. Friendly and cool, Riley takes his music seriously and is continuously switching up his delivery mode, never boring the listener. But he has a special love for soca music, evident in his wild movements while juggling the hits of the season, which he usually knows word for word. His international flare and love for what he does will be on display for all to enjoy at this week’s highly anticipated fete.

To whine and free your mind and body all night at this week’s Digicel Fantastic Fridays disco night will cost $1,200 presold and $1,500 at the gate for general admission, with Smirnoff drinks free all night courtesy of the liquor sponsor, who has something special for patrons who wear all-white. VIP all-inclusive tickets will cost $2,500 presold and $3,000 at the gate, with tickets on sale at Mas Camp and all Ammar’s locations. Le Masquerade costumes will also be available for viewing and purchase during the party with final payments now due on existing orders.