Stress Away at Sensational Saturday with Kes the Band 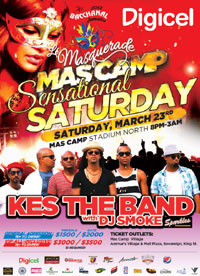 (Kingston, Jamaica – March 20, 2013) – There will be no Fantastic Friday fete this Friday at Mas Camp. Instead, Bacchanal Jamaica has planned something better. This Saturday March 23, soca lovers will be treated to the first and only Bacchanal Saturday party for the season, dubbed ‘Sensational Saturday’. This one-time treat will feature one of Trinidad’s and the Caribbean’s top performers, KES the Band. The highly anticipated finale in the six-week long warm-up schedule will be taken over by Le Masquerade title sponsor Digicel.

In 2012, the song on every soca junkie’s lips was “Wotless”, a song that described the carefree and relaxed nature of a bonafide Caribbean national with a deep love for everything soca. To KES the Band, this song had even greater significance. It was the song that would earn the band their first International/Trinidad Groovy Soca Monarch title, a testament to their years of hard work and dedication to a craft they had worked on for years. Their unique sound and style has since led to the emergence of a new genre referred to as Island Pop, a fusion of soca, reggae, pop and R&B influences. Since their entry into the industry and their epic win at the 2012 Soca Monarch finals, the band has performed in international markets including Europe, Canada, the USA, Japan and China and has opened for top acts including Usher, John Legend, Maroon 5, Rihanna and Evanescence.

But before all the success and fame, back in 1998, Kees Dieffenthaller in the role of lead vocalist, along with his brothers Hans (drums) and Jon (guitar), and his best friend Riad Boochoon who plays the bass guitar, formed a cover band called Limestone. Kees and his bandmates instantly made fans because of their effortless good looks and Kees’ amazing vocal range. A year later, wanting to make greater tracks in the industry, the group renamed themselves Rydimorai and began performing original music blending calypso, funk, reggae and rock sounds. A few years later, the opportunity came for the inseparable four to become the core of a rising soca group in Trinidad named Imij and Co., and from 2001 to 2005, the band honed their songwriting and performance skills as part of this team. By 2005, the three baldheads and a dread left Imij and Co. with the main objective of creating their own band with an innovative sound. The new band was ready to attack the market not just as an exceptional Trinidad group, but as an exceptional international band, crossing all genres and appealing to many. Since then, KES the Band has achieved so much more than they had ever dreamed of and they show no signs of slowing down. In 2007, Kes co-wrote a song with multiple Grammy award winner, Desmond Child, which was recorded by American Idol alumni Ace Young and was included on his self-titled album. In 2011, the band was nominated for a Soul Train Award for Best Caribbean Performance for the monster hit “Wotless”. And this is just the tip of the iceberg for the dynamic and ever fresh band who continues to rack up regional and international accolades and boast a fan base that spreads far beyond the shores of their Caribbean birthplace. With a large catalogue and season favourites including “Tief A Whine” and “Tuesday on the Rocks”, KES the Band will be in full command of their audience on Saturday March 23.

Fans can “Stress Away” at Sensational Saturday for $1,500 presold and $2,000 at the gate for general admission. For the all-inclusive VIP experience, tickets can be purchased for $3,000 presold and $3,500 at the gate. Tickets are available at all locations of Ammar’s and Mas Camp. The Le Masquerade season continues with a full takeover of the James Bond Beach in St. Mary on Saturday March 30 with the one-of-a-kind paint, beach and soca party, Bacchanal Beach J’ouvert featuring live performances from Shurwayne Winchester, Patrice Roberts & Farmer Nappy. On April 5, Le Masquerade returns to Kingston for Bacchanal J’ouvert with the “Queen of Bacchanal” Destra Garcia, and the climax of the season, the April 7 Road March.