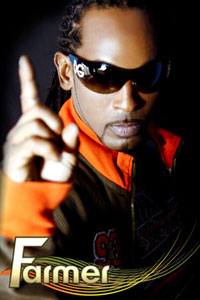 By October the melody of his song was stuck in our heads and the lyrics bounced off the tongues of many unprepared music lovers. Even before the hype begun for the Carnival 2k8 season, he was already receiving remarkable airplay and was somewhat responsible for setting the groovy Soca tone for 2k8. We were already “Chippin down the road” and encouraging many others to do the same. Farmer formerly Farmer Nappy has been enjoying immense success since his debut as a Solo artiste in May 2007. His smooth and successful transition is one that led to him copping the title of “Best Groovy Soca Song Of The Year” at COTT Awards 2008 for his smash hit “Chippin.”

Born Darryl Henry, Farmer has experienced many changes in the Soca industry and has utilized every experience to become the artiste he is today.  Following his bumper season from Crop Over into Trinidad and Tobago’s Carnival 2k8, he is at it again, this time it is all about Belly Dancer!! The recently released groovy soca track is already receiving satisfactory airplay in Trinidad and Tobago, Canada, UK, New York and many Caribbean islands.

Farmer’s inspiration for his new single, "Belly Dancer" came to him after hearing the riddim in the studio. He said as soon as he heard the riddim he told the producer to “burn it for him one time.” When asked about the penning of the lyrics for this song, Nappy responded, “The words came to me instantly; De ting start around two in de morning, came to me first and the words flowed from there.”  He continued by saying, “My manager heard the riddim and said it sounded a bit Arabian, with that came, belly belly belly belly dancer.”

It is with no exaggeration, I say, Oh and what sexy bellies we see in his new video which is currently receiving heavy rotation on synergy TV. With editing by Lee Aleong of Lee Designs and conceptualization by Katrina Chandler of Country Life Entertainment, it truly captures the essence of the song. The catchy dance choreography and sultry belly dancing is sure to be a hit with viewers. In the not too distant future the video would also be seen on another one of the Caribbean’s premier entertainment stations, TEMPO. He continues to step up his game and the video is such proof.

Farmer has earned his place in the soca industry; not just as a “hype man” but also for the astounding work he has done as far as song writing throughout his career while under the Xtatik umbrella. He was responsible for the co-writing of many Xtatik hits such as, “BIG TRUCK”, “MUSIC FARM”, “TAYEE AYEE”, “CROWDED” and “WORKING DOG” to name a few. He won the award for ‘best song writer’ in 1998 for “FOOTSTEPS”, which also won 'Road March of the Year' and ‘Best song of the Year’ for Trinidad’s Carnival. He has been in the soca realm for twenty-six (26) years, having spent twenty-five (25) of them at the right hand of Soca Prince Machel Montano and the band Xtatik. Although Farmer is now a solo artiste, he still appears on stage as part as the Xtatik entourage to sold out audiences all over the world.  Stay tuned for more Carnival 2k9 releases from Farmer and the soon to be remix of Belly Dancer!

To view the video for Belly dancer, log on to www.myspace.com/1farmernappy