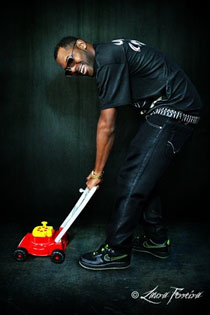 Port-of-Spain, Trinidad. March 28, 2013 -- Just a few days after celebrating his birthday in England on March 22, Trinidad and Tobago entertainer, Rodney Le Blanc, better known as Benjai, is heading to Jamaica this today, Thursday, March 28. With a bag full of hit singles and a recently released video for a track produced by UK producer, C Dot and collaboratively vocalized with UK based vocalist, D Rilla, Benjai’s rearing to go.

Le Blanc’s energy is high and despite one court matter still hanging over his head, he is promising his fans nothing but excellence. The Eastside Trinidad native has been working hard in the past couple of years to produce a sound that is distinctly his own. He’s achieved that and says there’s a lot of great music to come. On the weekend, his repertoire for the Jamaican fete lovers who are gearing up for Carnival on the island, will likely include ‘Trini’, ‘People’s Champion’, ‘True Story’ and possibly his newest track alongside D Rilla, ‘Controlling’. The song has an accompanying video, which was recently released to entertainment media channels across the Caribbean and so far, the reviews have been pretty impressive. Shot in England during Benjai’s trip there, it’s one of only a few videos ever done by the entertainer. In fact, his last video shot was while he was a member of fellow entertainer, Bunji Garlin’s Asylum Band, which was certainly some time ago. He says the opportunity presented itself this time around and the timing was just right.

With tremendous crossover appeal, both artistes as well as producer, C Dot are optimistic about this particular single- boasting that it delivers a perfect synthesis of Caribbean flavor and UK ‘dance’ heat. Benjai’s efforts to take his music to higher heights continue and it shows. This latest project is just one of many great marketing initiatives planned by the entertainer and his team- notwithstanding the fact however that he will remain true to his Caribbean heritage. He believes in the fusion of sounds and melodies but is bent on keeping his fans at home in the Caribbean, spellbound by his sound. “That won’t change. I can only be me but with growth comes change sometimes. We’ll be exploring different things so look out for a lot,” he warned.

Jamaica is merely one small stop on a list of ever increasing gigs being undertaken by the people’s champion as some refer to him. His commitment to music and the career path he has taken shows in his daily strive. “If not music, what? It’s the source of happiness for so many people. I am happy that when it all boils down, I can make people happy with the music I deliver,” he said.