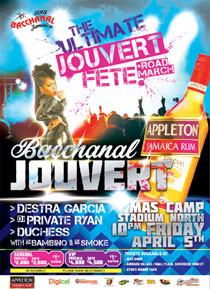 (Kingston, Jamaica – March 31, 2013) – The penultimate fete for Bacchanal Jamaica’s 2013 Le Masquerade season is the Kingston-based j’ouvert fete and road march set to take place on Friday April 5 starting at 10:00 p.m. at Mas Camp. The ‘dutty mas’ fete which traditionally proceeds the ‘pretty mas’ road march on Carnival Sunday and the only one of its kind in Jamaica, will feature a live performance from Trinidad’s “Queen of Bacchanal”, Destra Garcia.

Before the action on the road, Trinidad’s Destra Garcia will bring her eclectic style, fashion and flair to Mas Camp with what is expected to be a high energy performance of her musical catalogue, spanning more than ten years. Garcia has worked hard to become the Caribbean’s most requested female soca artiste. She has become known for her top quality songs and a vocal range that has been perfected since she was ten years old. Garcia has a gospel background and developed her soca persona by entering various soca and calypso competitions, achieving many successes along the way, including winning the Junior Calypso Monarch Title at ages 14 and 15. In 1999, the vocal talent was noticed by Roy Cape after the performance of her mega-hit “Ah Have a Man Already”. This encounter led her to become the first female lead of Cape’s band, the Roy Cape All Stars. Churning out hits that included “Tremble It”, Garcia stepped away from the band briefly to pursue a solo career but then re-joined the band scene in 2002 as the lead singer for Atlantik. There, her catalogue grew to include “Fly”, “Bonnie & Clyde” and “I Dare You”.

In 2003, her duet and virtual carnival anthem, “It’s Carnival”, with fellow Trinidadian artiste Machel Montano, was released on her debut album ‘Red, White & Black’, and placed second in the Trinidad/International Soca Monarch Competition that year. Year after year, Destra, as she is known, has engaged her audience with over five albums and many hits including “Feel Like Wukkin” and “Cool it Down”, as well as this season’s female anthem tease, “Call My Name”. Destra is no stranger to Jamaican shores and shares her excitement for her upcoming performance saying, “I never get tired of coming to Jamaica. We as Caribbean people have an undeniable rhythm and energy that you can almost touch. When I perform here, I just feed off of it and my performances are always over the top as a result. I’m really looking forward to being on the Bacchanal Jamaica stage again because this is not just a performance, but time spent with family.”

Bacchanal J’ouvert fans can join the revelry, paint and soca madness for $2,000 pre-sold for general admission with pre-sold all-inclusive VIP tickets available for $4,000. Tickets may be purchased at Mas Camp, Ammar’s, Xtra’s Upper Manor Park Plaza and MegaMart stores on Waterloo Road and in Portmore. General and VIP tickets will also be available at the gate for $2,500 and $4,500 respectively. Musical stylings for the fete will be delivered by DJs Private Ryan and Smoke. Joining them will be Trinidad’s DJ Duchess Alicia, who delivered her own brand of juggling skills at one of this season’s past Fantastic Fridays’ fetes.

With a one-day break in between, the 2013 Le Masquerade season will conclude with the ‘pretty mas’ Road March and costume display on Sunday April 7 through the streets of Kingston.