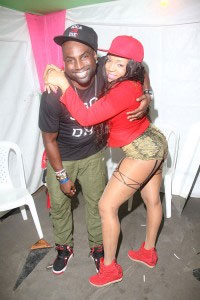 (Kingston, Jamaica – April 8, 2013) – It was clear for all to see that Bacchanal Jamaica’s staging of their penultimate fete, the traditional j’ouvert ‘dutty mas’ party that precedes the Carnival Sunday Road March, was a success in every aspect. Marshalled by a dynamite performance from Trinidad’s “Queen of Bacchanal”, Destra Garcia, the excitement of the night was palpable from start to finish, leaving bittersweet memories as revelers drew closer to the end of a season and reminisced on the magnificent performances delivered by Bacchanal Jamaica throughout the Le Masquerade season.

With three Caribbean-renowned deejays and two performers with large fan followings, the Appleton-sponsored Bacchanal J’ouvert fete & road march began with a magnificent musical delivery from DJ Private Ryan, a native of Trinidad and a staple at Bacchanal Jamaica events. He wasted no time in working the jam-packed venue into a frenzy with soca hits including ‘Anti-Stush” by Bunji Garlin, Swappi’s “Bubble on a DJ” and “Ah Ting” from Kes the Band featuring Kerwin DuBois. Sporting colourful, floppy joker-stye hats and with Appleton mugs in hand, revelers bubbled, jumped, waved and sang as the deejay delivered effortlessly from his arsenal.

As the crowd grew and the anticipation heightened, MC for the night, Deidre James, could no longer keep the crowd waiting. At approximately 12:30 a.m., James welcomed the shapely Destra on stage who entered to fever-pitch screams, whistles and loud horns. Wearing a short gold-coloured jeans shorts with a gold and black bustier and red crop jacket, Destra flashed her waist-length hair in the popular ‘dutty whine’ Jamaican dance, creating pandemonium inside Mas Camp. Destra instantly jumped into her catalogue of hits including “Bacchanal”, “Cool it Down”, “Feel Like Wukkin” and “I Dare You”. With her more than 2000-strong fans singing word for word, Destra told the crowd, “Jamaica is one of my favourite places to visit!” With love in her heart and soca in her blood, Destra re-affirmed her status as the queen of bacchanal with her stunning voice, endless energy and commitment to pleasing her fans. Having whined and jiggled to the immense pleasure of the crowd, Destra invited three Jamaican men on stage for what would prove to be a hilarious “whine-off”, which left patrons in stitches and Destra holding on to her whining crown. Not afraid or limited by her craft, Destra proved her prowess as an entertainer by performing Katy Perry’s “Wide Awake” before jumping back into “Give It to Me Proper” and “Baddist”.

With the crowd on a high, and powder flashing everywhere, Destra introduced radio personality and disc jock-cum-performing artiste, Super Jigga TC, who blasted on stage with his soca hits including “Action” and “We Limin”. The fearless performer challenged the females in the fete to show that they had the best whining skills; one young lady who says she was raised in the Dominican Republic, stepped up to the challenge. While she held her own, she wasn’t ready for the acrobatics that TC had in mind as her hoisted her from his waist to his shoulders with ease. Super Jigga TC then closed his set with Bunji Garlin’s “Differentology” and “Bacchanalist” by Kerwin DuBois.

The vivacious Miss Garcia re-entered the stage and had the crowd straining the barriers as she belted out “Call My Name”, “Fly”, “Bonnie & Clyde” and closed her over 60-minute set with “It’s Carnival”, as she asked patrons to join hands in Caribbean unity. With the crowd begging for more, Destra gave a rousing tribute to the late Bob Marley with soulful covers of some of his greatest hits including “Redemption Song”, “War” and “Three Little Birds”. Following her performance, Destra explained that the dynamics behind her 2012/13 hit “Call My Name” saying, “GBM Productions, who wrote and produced the song, looked at me and said ‘you need a song like this that’s carefree and relaxing.’ Initially, I thought it was too “boasy” for me and I’m not like that. But having recalled the song, I realised it was an easy song and I really liked the vibes. This song is about the fans, about all the people that love Destra and enjoying that moment. And when you mash up the place like this, it’s easy to sing a song like that.”

Following Destra’s vibes-filled set, the feteing madness continued with DJ Duchess Alicia from Trinidad and DJ Smoke from local sound system, Renaissance Disco. The j’ouvert took on a whole new energy when more powder along with blue and white paint was unleashed on revelers inside Mas Camp. The two deejays worked effortlessly together and individually to unleash a mix of soca, dancehall and pop hits, welcomed loudly by patrons waiting to get on the road. And at approximately 4:00 a.m., the trucks were ready and the road march got underway with the crowd shouting “Wi ready”, providing a fitting culmination to a fantastic night.

On Sunday April 7, the Le Masquerade season will officially close with a Road March and costume display featuring twelve colourful, skimpy and bejewelled pieces. The Road March, set to start at 10:00 a.m., will travel from Mas Camp to Old Hope Road unto Hope Road, traversing Lady Musgrave Road unto Trafalgar Road. From there, masqueraders will march unto Waterloo Road up to West Kings House Road, turning westerly unto Constant Spring Road, heading toward Half Way Tree, then turning easterly toward New Kingston, heading toward Seaview Avenue unto Mountain View Avenue and back to the home of Bacchanal Jamaica.