A Tribute to Peggy Castanada 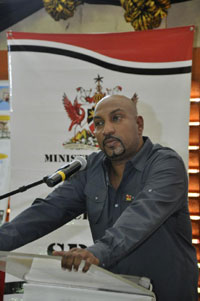 The Honourable Anil Roberts, Minister of Sport, the only male participant at the all Women and Girls in Sport Festival enjoyed a game of netball and tennis with the athletes last Saturday 13th April, 2013 at the Eastern Regional Sport Complex and Eddie Hart Ground, Tacarigua.

The event took off to an early start with the Opening Ceremony, which was the forum use to welcome participants and spectators to the event and also for the Ministry of Sport to pay tribute to national netball icon Peggy Castanada.

Minister Roberts shared the stage with Brother Valentino ‘The people’s calypsonian’ in celebration honour of the contributions Castanada made to the netball fraternity.  Roberts presented the award on behalf of the Ministry whilst Brother Valentino paid tribute in song to his wife.

Castanada, a netball coach for 29 years under the Ministry of Sport will retire from the Ministry this year. Her contributions to the development of the fraternity includes imparting her knowledge and practical skills with primary and secondary schools, community groups, in addition to capacity building for coaches and umpires.  Castanada, a living legend has been and continues to play an instrumental role at several major Ministry of Sport programmes.

She spent a period of 11 years on the national team as a goal shooter, from 1972 until 1983. The highlight of her career was being part of the national team, which shared the World Championship with Australia and New Zealand in 1979, the only Trinidad and Tobago team to have ever won a world title. She was also awarded the Trinidad and Tobago Chaconia Gold Medal for this accomplishment.

The respect for Castanada was evident as the spectators and athletes screamed and applauded when the Honourable Minister proudly presented the award to the Netball legend. The charismatic Roberts then addressed the audience with an inspirational message.

Using the influence of his mother on his own academic and sporting achievements as an example, he told the large audience of young women, that they were very important to Trinidad and Tobago as they would eventually shape this country’s next generation.

He then used his experience as a coach to reflect on the impressive attitude shared by female athletes in Trinidad and Tobago. Minister Roberts has coached world class female athletes such as Terry-ann Evelyn, Sangeeta Puri, Cerian Gibbes, Leah Martindale, Siobhan Cropper, Ayeisha Colymore and Sharntelle Maclean.

He stated, “As a coach, I can tell you, the best athletes I have ever coached are women. They are the most disciplined, the ones who reach on time, the ones who put more passion into their workouts and take it seriously. They are also the ones that go home eat properly, sleep on time and show a lot of love and passion for the sport.”

Concluding, he urged the ladies to be dedicated in their endeavours as they moved forward to securing a positive future, and stated that they should remember that “we are what we repeatedly do therefore EXCELLENCE is not an act but a habit”- Aristotle.