Photo: Costumes for the 25th annual Atlanta Caribbean Carnival are unveiled at the press conference held at the Westin Hotel

(Atlanta, Georgia) The Atlanta Caribbean Carnival Bandleaders Association, Inc held a press conference over the weekend to officially launch the 25th Atlanta Caribbean Carnival season in the city. With Conjure as a major sponsor plus reality star/designer Dwight Eubanks and Miss Universe Bahamas Celeste Marshall as parade grand marshals, this year’s event is expected to live up to its theme of ‘Carnival Is Mas And Music’.

The event was held at the Westin Hotel and featured a taste of the islands with several delectable delights including island patties and iced tea. While there were proud sponsors present and beauty queens aplenty, the crowning moment of the evening was when the bands proudly displayed their costumes, announced their themes and took the stage to strut their stuff. 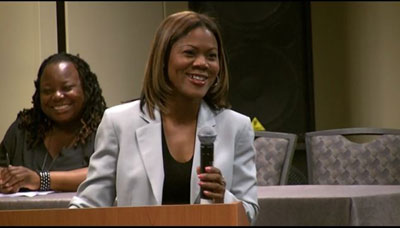 “We set the trend so we have to make sure everyone follows,” said ACCBA President, Patricia Henry on being the first Carnival parade to hit North America for the year.

She reflected that 25 years speaks of the longevity of the event and felt it spoke volumes of both the Caribbean diaspora which participates as well as the American community which comes out to observe.

“It is a wonderful thing for us,” Henry added. “A lot of Americans can’t get to the Caribbean so we bring the Caribbean to them and I love that. This year as we celebrate 25 years, we are targeting the American community and they love it. We have an overwhelming response from the American population and we are going to move forward doing that in the years to come.

Candace Byrd, Chief of Staff for Atlanta Mayor Kasim Reed brought congratulations on his behalf, noting that the Caribbean Carnival is truly a part of Atlanta and speaks to the city’s diversity.

“To celebrate the Caribbean history and culture in the city of Atlanta is truly an honor,” she stated. “Atlanta prides itself on -- or at least speaks to itself as an international city and we would not be an international city without all of the gifts, talents, cultures, people, heritage and food from this wonderful Caribbean ancestry.”

This year's Carnival will also host a new venue beginning On Vine St., North West and ending with the Festival Village at the Morris Brown Herndon football stadium. The festival village will showcase the talents of some of the Caribbean region’s top local performers.

Additionally, it was revealed that this year, nearly 20 bands will be participating in the adult Carnival alone.