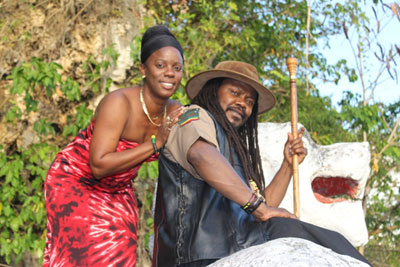 Tek Di Pressure Off looks at the relationships between politicians and the people. It also highlights the problem that politicians “excite people with their false predictions” and “lose vision” after gaining power. Luciano and Lady Virtue send a powerful message to Caribbean governments: “Tek di pressure off the poor people, I’m talking to you Mr. Politician look how much dem support you so everything for them you should do”.

Lady Virtue Explains the inspiration for such a controversial song: “The idea for the song came about after I saw how people were living in my country and the struggles at hand not only in Barbados but all over the Caribbean and knowing that at the end of the day it’s the politicians who can and should really take the pressure off.”

Lady Virtue hails from St. Michael, Barbados and grew up around Reggae. Songs from Bob Marley being played on the radio in her home was her first introduction to Reggae, and at an early age she decided she wanted to be a Reggae artiste. After singing in high school choirs and working as a DJ in her teen years, she acquired the skills and the confidence to take on a musical career.

While finding success singing Calypso, releasing two albums in the genre and making a name for herself in Barbados, the singer/songwriter was determined expand into the reggae field - the music she says is a source of positive messages for people within the Caribbean and across the world.

Already known for her conscious Reggae music in Barbados and armed with writing skills, microphone skills and skills on the turntables, Lady Virtue is now determined to stamp her style of reggae on the Caribbean scene. And Lady Virtue knew the best way to be recognised in Reggae is to partner with great Reggae artistes.

Lady Virtue says her collaboration with Luciano just made sense: “The song has received some excellent feedback so far and I know it will continue because of the type of song it is; it’s as though I was the voice of the people and Luciano added a special flavour to the song. Working with Luciano came about because of the type of song and seeing he is the poor people defender, this song was right up his street. He was the right man for the job.”

Tek Di Pressure Off is a catchy conscious Reggae tune that will resonate with many of Virtues fans as well as reggae music lovers, as people across the Caribbean and the world can identify with its message to the higher ups: Tek Di Pressure off!