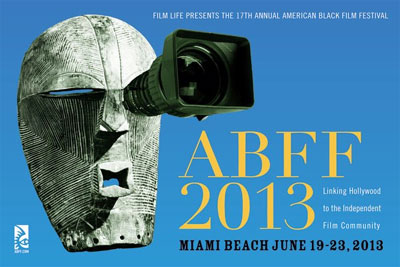 The ABFF-SEOPW CRA Community Showcase was launched in 2009 with the goal of promoting Miami’s local film industry talents and the Southeast Overtown/Park West Community Redevelopment Area to prospective investors and festival attendees alike. This year, the showcase will also make available to local youth from the community information on the disciplines and career opportunities that exist within the motion picture industry.

The showcase is sponsored in part by the SEOPW CRA as a redevelopment activity pursuant to its approved Community Redevelopment Plan.

Submissions must be received by May 10, 2013. Films submitted after the deadline will not be accepted or reviewed by the ABFF Screening Pane

PRIZE:
Selected films will be premiered at “Films Over Miami,” an ABFF-SEOPW CRA Community Showcase, taking place at the Colony Theatre in Miami Beach on Sunday, June 23, as part of the 17th annual American Black Film Festival. The winners would also receive passes to attend events at the festival and will be highlighted in a
post-festival release.

TERMS AND CONDITIONS
The SEOPW CRA is hereby granted the right to utilize an excerpt from any film submitted and accepted for exhibition at the Community Showcase for promotional purposes. Respondent submitting film in response to this solicitation hereby warrants that the SEOPW CRA is authorized to commit the film for screening, and understands and accepts these requirements and regulations.

Respondent shall indemnify and hold harmless the City of Miami and the SEOPW CRA from and against any and all claims, liabilities, losses, damages, and expenses (including but not limited to attorneys’ fees, and costs of the court) which may be incurred by reason of any claim involving copyright, trademark, credits, publicity, screening, and loss of or damage to the screening videos submitted.

==================================
About ABFF
The American Black Film Festival (ABFF) is a five-day retreat and international film market dedicated to strengthening the Black filmmaking community. Established in 1997, the core mission of the ABFF is to promote cultural diversity within the motion picture industry. Through its film showcases and special contests, it annually introduces the top echelon of emerging artists to the film and television industry.

The ABFF is a property of Film Life, Inc., a multifaceted entertainment company headquartered in New York City. The company was founded in 2001 by Jeff Friday, a veteran of the consumer product marketing and advertising industries. While best known for creating the American Black Film Festival (ABFF), Film Life’s operations center on developing/licensing innovative content across all forms of media and providing strategic advisory services to a wide range of companies in the entertainment, media and consumer product industries.

The American Black Film Festival will be held June 19 - 23, 2013. Festival passes and tickets are available for purchase at http://www.abff.com/festival/buy/passes-and-tickets.php