A leader among his peers 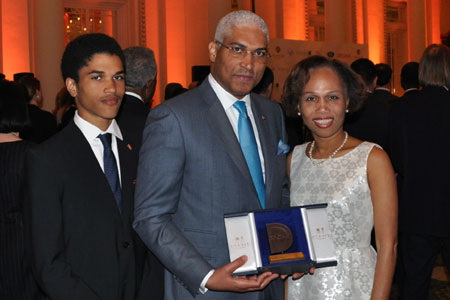 Garvin Nicholas has won the coveted Diplomat of the Year from the Americas Award in his role as High Commissioner to the United Kingdom.

London is host to one of the largest diplomatic communities comprising some of the most experienced and influential diplomats in the world.

High Commissioner Nicholas was nominated and voted for by his peers in the Diplomatic Community in the UK. The Award Ceremony was put on by DIPLOMAT magazine at the Langham Hotel in London and hosted by former British Ambassador to the United States, Sir Christopher Meyer.

Nicholas has lifted the image and influence of Trinidad and Tobago in the UK and the Commonwealth over the last two and a half years.

As a result of his efforts, Trinidad and Tobago is now recognised as an active and influential participant in the quest to strike a balance between human rights and democracy and development issues as the Commonwealth charts its future.

Trinidad and Tobago's culture has been significantly exposed to the diplomatic community and the general population of the UK with initiatives such as the very impressive four and a half week Cultural Village put on during the summer of 2012, our Golden Jubilee year, and the annual Parang and varied religious receptions hosted by Nicholas in the UK.

Nicholas, who came within a few hundred votes of winning the Diego Martin North East constituency in the 2010 General Elections, noted that while he enjoyed his role as High Commissioner, he got into politics to serve the people and enjoys his role most when it impacts directly and positively on the lives of people.

Nicholas thanked his staff for their invaluable support to him in the execution of his role and noted that his successes would not have been possible without that support.

In moving forward he wished to note that, "Trinidad and Tobago is a nation with huge potential, sometimes you get a better appreciation for the potential from a distance. We however need to be far more proactive as well as responsive to opportunities as the best opportunities do not wait for us to deliberate indefinitely."