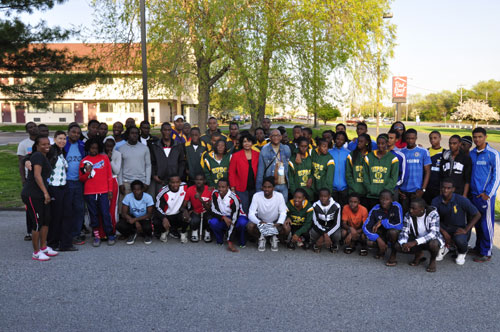 Supporting the contingent of aspiring T&T athletes were Permanent Secretary in the Ministry of Sport, Ashwin Creed and Consulate General for Trinidad and Tobago in New York City, Mrs. Rudwattee Nan Gosein- Ramgoolam.

With the responsibility to represent Trinidad and Tobago in the US, Her Excellency felt privileged to host the teams to a luncheon in the company of PS Creed. She gave special thanks to the Ministry of Sport for their continued support to the athletes and congratulated all teams inclusive of their teachers and coaches for their sporting efforts to take Trinidad and Tobago on the international stage.

A prelude to the Penn Relays was the hosting of T &T Relay Carnival held for the first time on March 09th and 10th, 2013. The marquee event was developed to bring together sports men and women from various countries such as USA, Canada, Suriname and the Region. This meet is designed to mentally and physically prepare our local athletes attending secondary schools and colleges between the ages of (12-19) years, to enter international competitions such as the Penn Relays. Mrs. Ramgoolam was present at the Trinidad and Tobago Relay Carnival.

PS Creed, a former track and field athlete had a message to the youngsters that went beyond their participation at the Penn Relays. He told them “as young athletes if your intention is to become World Class, then you should not measure yourselves by what you see at home, neither by what you see at the CARIFTA games but rather, you should measure yourselves by what happens in the world”.

He also made reference to a significant aspect of the 2012 Olympics Games. He highlighted the fact that a lot of young athletes won medals. For example, Lalonde Gordon just over 21 years, a double bronze medallist in the 400m and 4 x 400m relay and Olympic Gold medallist Keshorn Walcott, just 19 years old. PS Creed urged the youngsters to utilise and embrace the opportunities presented to them because in two (2) or three (3) years, they too can become an Olympic medallist.

Mrs. Nan Ramgoolam also had a message for the athletes. She indicated that for thirty (30) years she has worked at the Ministry of Education as a teacher at primary school, a mathematics teacher at secondary school, a guidance councillor for 10 years in addition to working at Ministry of Education Head Office as a senior person for quite a number of years. So her whole background is education and passion for kids.

Her Excellency strongly believes that sport is one of the most important avenues to ensure that a nation brings about productive citizens who can contribute to the development of any society. She felt confident by looking at the performances that Trinidad and Tobago brought to the games and feels we are in the right hands for sustainable sport development. She urged the young athletes to go back home and impart their knowledge in encouraging their friends, neighbours, and family members, of the importance of this aspect of their lives and as they move forward to success. They should help and encourage each other by spreading the word in terms of the development of sport particularly in track and field. She stated that we are pretty good in cricket and football and would like to see the track and field move to its pinnacle.

She urged the athletes that they should be pretty good with their academics and made them aware that there were lots of scholarships offered internationally and that it was important to mix your academic with sports. In closing she reminded the youngsters that the sky has no limit- and that there was always room for those who were committed, will powered, dedicated, disciplined, and most of all focussed.

Moved with those words of inspiration, 18 year old Peli Alzola of St. Francios Girls’ College stood proudly as she presented the vote of thanks on behalf of all the teams. Alzola ran the 2nd leg in the 4 x 100m relay placing third in large schools.

On behalf of all the teams, she said that they were grateful for the help and assistance received by the Ministry of Sport and the support from the Consulate General. Not just the monetary help but also the support they received especially being at the venue to watch them run their races which give them the confidence to perform at their peak.

The Penn Relays, hosted in Philadelphia since 1895, is billed as the longest uninterrupted collegiate track meet in the country. It has grown to include high school, youth, masters and even international competition featuring Olympians and Olympic hopefuls. Approximately 17,000 people filled Penn Park in support of the momentous occasion.

The Ministry remains committed to supporting our athletes and further encourage them to do their part – to be competitive –to go beyond participation – to go beyond exposure and to become competitive in preparing for the sport.