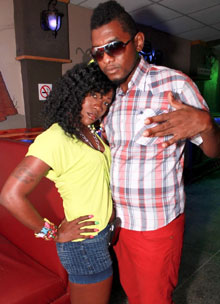 Port-of-Spain, Trinidad. May 13, 2013 -- It’s not the first time that artistes out of T&T and Jamaica have teamed up to create great music and it certainly won’t be the last. What makes this new collaboration between one of dancehall music’s most current female entertainers and a budding artist out of T&T a unique one is the fact that it was a natural connection.

Shane Howell is best known as Lawless in the music business. He’s the man behind Bing Bang studios- a Trinidad based production house that engineered the sound on the single he calls ‘Bruck It Out’. The single originally featured Lawless as a solo act, however upon hearing the song, the local dancehall act said Jamaica’s Sheba immediately took a liking to it. “One of my videographers was in Jamaica to shoot Sheba’s video and they were in the studio doing ‘Clothespin’,” he said, adding that while there, Sheba heard his single and told his videographer that she really liked it. He said they thought the artiste was Jamaican and was shocked to find out that it was a Trinidadian act. Later, Lawless said the connection was made and following social media interactions and a trip by Sheba to T&T sometime after, ‘Bruck It Out’ was remixed to a version that many have described as smoking hot.

The song’s final version is owed to the work of not just Bing Bang Studios but also Zig Boi Music and Versastyle Entertainment. Lawless explained that Mr. Spine of Holyhouse Production, which is now under the Zig Boi umbrella, was quite instrumental in the quality of the track’s sound. According to Lawless, the track has been getting quite a lot of love in Jamaica. “The song was released first in Jamaica,” he said, noting that now their focus is on creating a video to accompany the single. Aware of the song’s title similarity to Mr. Vegas’ ‘Bruk It Down’, Lawless explained that this was not purposely done. “We had the name for the song even before Mr. Vegas’ track was released,” he said.

Beyond this latest development in his budding music career, Lawless says he’s readying himself for a mini-tour of the Caribbean with Sheba, to perform the single. It won’t be a strange setting for him as already, he’s opened for acts such as Konshens, Popcaan and French Montana at Trinidad’s Club Sting. “My dream as an artiste is to reach my full potential. I dream of hearing my music on MTV and BET,” he said, adding that he believes in his abilities as both a producer and artiste, something he says he knows is key to progressing in any aspect of life.