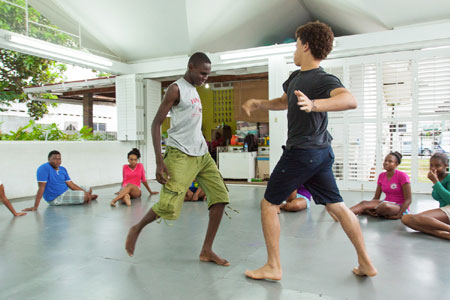 May 12, 2013 – Port of Spain, Trinidad and Tobago -- Noble Douglas’ veteran children’s theatre company, Lilliput Children’s Theatre, will ignite the stage at Queen’s Hall with its 2013 production, EIEIO ANIMAL FARM. The modern twist on George Orwell’s critically acclaimed, Animal Farm, opens this Friday May 17, 2013 at 7:30 p.m. and closes on Sunday May 19, 2013.
The exotic farm that is EIEIO ANIMAL FARM is a humorous commentary that looks at the pros and cons of healthy living habits to heavier themes of societal hierarchies and systems of control and dominance. On the Bacchanal Farm there is never a dull moment as common farm animals reside with the likes of tigers, cheetahs, woodpeckers, flamingos, peacocks, monkeys and giraffes. Divided opinions exist amongst imbalances of power leading to disputes and mutinies. The animals must learn to exist in a system where “all animals are equal but some animals are more equal than others.”

Lilliput continues to challenge its thespians and audiences to new perspectives through engaging in serious subject matter. Douglas shared, “Children are exposed to so much stimuli and we cannot control all that they consume. EIEIO ANIMAL FARM is an expression of their internalisation of their society.” In quintessential Lilliputian style, the 2013 presentation features a tableau of dance and drama woven together by an invigorating musical score that promises to keep any audience on the edge of their seats.

Lilliput Children’s Theatre teaches theatre to children aged 7 to 18 and dance to children aged 3 to 18. It was founded in 1975 and encourages self-confidence through the challenge of theatre, game play and imagination. The theatre’s production team is led by founder and artistic director, Douglas and drama director, Wendell Manwarren, supported by drama tutors, elisha efua bartels and Tonya Evans and dance instructors, Evans, Arlene Frank, Charlene Harris, Charlene Rollock and Louanna Martin. For more information, email liza@estuaryPR.com.