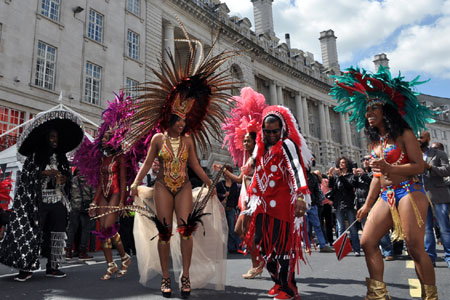 As throngs of visitors coursed through the event, thousands of patrons converged on the Trinidad and Tobago High Commission section, enthralled by the explosion of colours, pulsating tempo of calypso and soca music, rich aromas of native cuisine such as roti and bake and buljol, and the liveliest ambiance most Londoners had ever seen. The indigenous rhythms of live steelband and tassa drums resonated powerfully in the air, transporting the crowd to a Carnival dimension.

Trinidad and Tobago was the only Caribbean country represented at The World on Regent Street festival, which included showings by The United States of America, France and India, among others. Situated between Piccadilly Circus and Oxford Circus in London, the event proved wildly popular attracting thousands of visitors from various countries.

Without a doubt, the highlight of the festival was the display put on by the Trinidad and Tobago High Commission. The atmosphere was euphoric, with the huge crowd captivated by the live music of native performers including Konata Alleyne, John Blood and Nikisha Pile. The massive audience was also treated to performances by traditional mas characters, the Midnight Robber, Fancy Indian, Pierrot Grenade and Dame Lorraine, who took to the crowds and posed for delighted patrons. Dancers heightened the revelry as their dazzling Carnival costumes lit up the crowd. Thrilled patrons soon learned how to emulate the Carnival dancers as they participated in chutney and soca dancing classes, with many vowing to visit Trinidad and Tobago to experience the real Carnival. 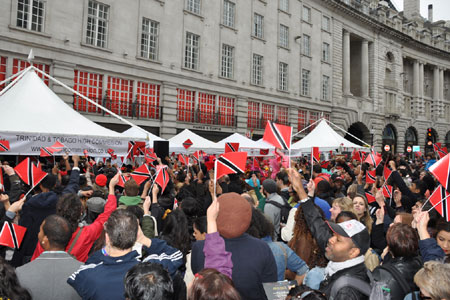 The excitement of the crowd reached a pitch when the final performers of the day, the iconic 3Canal took the stage. Trinidad and Tobago natives and Londoners alike waved the national red, white and black flags high as they danced to the electrifying melody of the band’s classic tunes, including “Talk Yuh Talk” and “Blue”.

His Excellency Garvin Nicholas was pleased by the large turnout and excitement of visitors to the Trinidad and Tobago section, noting that it was a great testament to the tremendous global appeal of Trinidad and Tobago’s culture. He emphasised his commitment to promoting Trinidad and Tobago on an international scale, remarking, “As High Commissioner, I continuously strive to utilise innovative avenues which will showcase our rich and vibrant culture in the United Kingdom and beyond.”