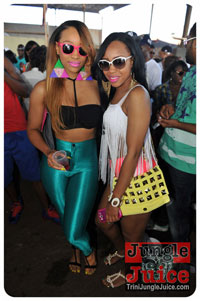 So its Memorial Monday and yet outside Shine looking like is Labor Day wknd.  Between the traffic back up making the streets look like a parking lot and the line of people waiting outside the entrance I was amazed.

We made it inside after 2 and VIP was looking very swanky.  From the Bartenura Moscato girls @ the entrance giving out complimentary wine and Shine mugs, to the specialty cocktail booth, Johnny Walker bar,  hookahs, and the shot girls, VIP was covered.  Did I forget to mention that there was a doubles stand and an entire food station with lots of tasty eats.....

Looking out into general admission the sea of people was endless.  Every corner of Soca Village was covered will people pumpin' to the sounds of all of Brooklyn's best djs and three imports from Red 96.7FM.  The music was on point and nothing was missing, every genre was covered.

The crowd was hype and in a gear; no stushness and based on the stage hovering  over the bar in general admission, there was no bad vantage point to view the entertainers or djs on stage.  From Brooklyn's local artists like Yankee Boy and Lyrikal to Lavaman and Kerwin Du Bois, the crowd was POSSESSED!!!

Now the rhythm section, well like they had they own fete in Shine.  It didn't matter what the dj was playing, they were in a zone and continued beating drums until the party done.  The Grenadians take over Shine.....

Shine Nine was one for the books.  By the end of the night you couldn't tell where general admission ended and VIP started.  VIP GET STORMED!!!!  All in all, it was a great event and the hard work put forth by B2B Ent was definitely evident.  Great job guys.