By Neil aka Joy Juice
Published on 19-May-13
In a nutshell, I packed up... boarded the flight and landed in the ATL... picked up the rental... got my mini cooler... and headed to the Demolition Crew's 9th Annual Cooler Fete at Jolie's Event Center. And to no surprise, the placed was packed... with coolers! All shapes! All sizes! Some ...
>> View Demolition Crew 9th Annual Cooler Fete Gallery
>> View Atlanta Carnival 2013 Coverage 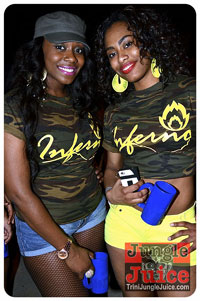 In a nutshell, I packed up... boarded the flight and landed in the ATL... picked up the rental... got my mini cooler... and headed to the Demolition Crew's 9th Annual Cooler Fete at Jolie's Event Center. And to no surprise, the placed was packed... with coolers! All shapes! All sizes! Some stainless steel... some styrofoam, some plastic and some people just had back packs with them. One crew had a garbage bag with their drinks. I guess they were trying to make sure they were able to properly dispose of their bottles of beer after the event. Very thoughtful!

At the end of the night.... what an event! Some of ATL's best Caribbean DJ's represented and no 'drink in yuh cup' was wasted! From beginning to end, the 9th Annual, deserved to be the 20th or 25th or something like that... by the time these boys get to that number... they might need a Stadium! I remember their 5th one ... Oh boy do I remember that one!

CROWD:
This crowd had height and size... thickness and length... This crowd had power.... it had singles... couples.... groups.... teams.... squads.... and even a platoon! No joke! It had beauties... brawn... brains and then some.... And in the midst of it all... TJJ was right there to capture it! I think we even spotted Nigel Fabian in there! Allyuh remember "Courts You Can at Courts?" Yeah, well him.

Good people, well dressed (for carnival season that is) and had the Trini/ATL quality to it.... I was impressed!

VENUE/ACCESSIBILITY:
Easily a thumbs up. Location wise, it was easily accessible from the 285 and I-20 and had lots of parking out front. Maybe the promoters could have done more with the decor.. but hey, we know they going all out for the 10th Annual!!! It was about 75 degrees and stars in the skies.... for a little while. But even the forcasted weather of thunderstorms could not stop the multitudes. And if the storm was the case... these guys and gals.... had it covered. They had access to the inside of the event if needed be. And when the drizzle came, it was no problem... yuh in ah "cooler fete"... what yuh expect???

VIBES:
From start to finish... the vibes was never ending. To name a few... Platinum Sounds of NY, One Drop of ATL and John Wayne Movements did not disappoint. And TnT's very own Kevin Baker and DJ Shaun did a great job keeping the tables turning. Much respect to all the DJ's that kept it live and alive.

FOOD & DRINKS:
Now this is simple... you name the drink... and it was in somebody's cooler! I guarantee it! Moet, Crystal, Absolut, Johnny, Baileys, Orange Juice, Cranberry, Cokes.... Did I just say "Cokes?" ... Lol. Yes, de people even had "Cokes" and to the vendor with the pelau... bess!

SERVICE:
There's not much I need to say here either other than much love and respect to the Demolition Crew and their team. They showed TJJ much love. We appreciate that a great deal. We even observed how they took care of the patrons. When the guy who was carrying the styrofoam cooler was saddened because his cooler fell and all his drinks scattered across the floor and he had nothing else take into the party.... the boys gave him ah cup ah ice! Nice guys right? Now that is service!

Another successful year to the Demolition Crew. I cannot wait for the 10th! I heard some big surprises are in store. So if you are planning on attending Atlanta Carnival next year, just know that the cooler fete is the weekend before... so book yuh plane ticket early and spend the week.

ps. Next year I think I bringing a bigger cooler than the stainless steel, side by side refrigerator I saw in there ... What you bringing?