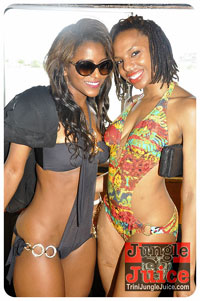 What a weekend!!!!!!!!!!!!  So the SKINS crew had a small lime that turned into a jam session yesterday to give us a feel of what to look forward to on the boat.  In the words of Text-A-Holic Juice the lime was EPIC!!!!!!

We still tired from yesterday but we were looking forward to SKINS so there is no way we missing this boat.  Its 2:15, we reach the pier and can't see nobody or the boat for that matter.  Then in the distance, we see Rudy with a smile directing us to the yacht nestled in the back @ the end of the pier.

The boat was packed and was only vibes as we boarded.  Within five minutes, we were on the water and jammin' down the East River on the Jewel.

We see doubles, chicken, pasta salad, garden salad and heard everybody ravin' about the food so we had to try for ourselves.  The food definitely hit the spot.  So after everyone had their fill of food from Wendy of D TRINI CREW FOOD CATERING the crowd migrated to the upper level to breeze out and pump.  This is when we were able to really see the girls and guys in their boat and swim attire.

With S.L.I and Majestic spinning, the boat was doing a little more than rocking but we were not complaining; only jamishness!!!!  Can we say heat in de place?????  So with the temperature scorching from all the wining and eye candy on the boat, people start to really free up, and a few of the ladies began to strip down to their bikinis.  Yes it was that kind of ride and it only fueled the vibe even more.  Everybody was likin' themselves on this boat.

We heard the DJs announce to head to the lower level so we did as we were told, only to enter into a reggae session that reminded me of the days "when dance was nice".  Only bubblin' was going on.  The boat dock back at the pier and we still winin' low and bubblin'.  Like nobody want to go home!!!

For its first year, the Ice Box Entertainment crew stepped it up and came out blazing a trail.  I'd have to agree with the DJs when they said in two years this ride will be a problem.  Just know TJJ will be on board.

Great job Rudy, Stuart and the entire Ice Box Entertainment family, for a weekend.  The TJJ family had a time and we look forward to your next event.