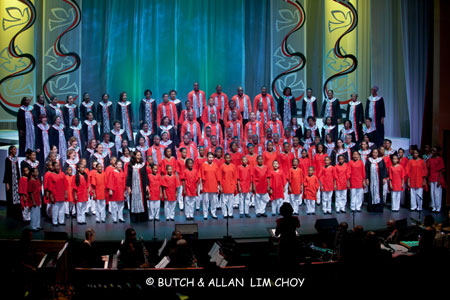 Photo: The Marionettes’ adult, Youth and Children’s choirs in July 2012

4 JUNE, 2013 (PORT OF SPAIN, TRINIDAD & TOBAGO): Few community organisations in Trinidad and Tobago survive to 50 years. But, with an eye to the next 50, the Marionettes Chorale has reached that milestone in style. They launch their yearlong 50th anniversary celebrations this July with Landmarks, for which they are extend an invitation to all past members to join them in two special anniversary numbers.

The group first announced the open call to past members on website and social media pages several weeks ago, and already dozens of past members, particularly those now based abroad, have responded enthusiastically – many already having booked their return passages home!

50 YEARS OF LANDMARKS TO CELEBRATE

With this commemorative Landmarks series, the Marionettes revisit some of their proudest moments, including award-winning performances at local and international competition; Caribbean premieres; and classic arrangements of regional favourites. Performing will be some of the group’s best-loved soloists, as well as the Marionettes Youth Chorale (founded in 1995), and Children’s Choir (founded just last year), under the batons of Musical Director Gretta Taylor and new Assistant Musical Director Dr. Roger Henry.

Formed in 1963 – the first choir to be formed in a post-Independence Trinidad & Tobago – the Marionettes first distinguished itself in the local Music Festival before retiring unbeaten in 1980. Each time it competed, the Marionettes was judged the Most Outstanding Choir of the Festival. For Musical Director Gretta Taylor, the next challenge was seeing how they would fare against the very best choirs in the world. On three international tours to the UK, the group copped four prizes at International Choral Festivals in Llangollen, Wales; Cork, Ireland; and Middlesbrough, England. Along the way, the Marionettes enjoyed standing ovations at venues like St. Martin-in-the-Fields (London) and the Hall of the Americas (Washington DC), earning high praise from renowned figures like John Rutter, Andrew Carter, and Colin Powell.

At home, the Marionettes are known for breaking new musical ground. The group was the first to blend choral voices with the steel pan, in performance with the Pan Am North Stars in the 1960s. They also have given local or Caribbean premieres of celebrated works like Orff’s Carmina Burana; Fanshawe’s African Sanctus; V. Williams’ Five Mystical Songs; Britten’s Ceremony of Carols; Poulenc’s Gloria; Bernstein’s Missa Brevis and Chichester Psalms; and Karl Jenkins’ The Armed Man (A Mass for Peace), including the accompanying film.

Their repertoire extends far beyond Western classical, however, and includes opera, spirituals, Broadway, Caribbean and international folk songs, and of course Trinidad & Tobago’s calypso. The Marionettes’ commitment to their national art forms includes the commissioning of choral arrangements of Caribbean and national folk songs, calypso and other music, to perform both at home and overseas.

Landmarks revisits some of the Marionettes’ most memorable moments, and runs Friday 12th, Saturday 13th and Sunday 14th July at the Queen’s Hall, with tickets going on sale at the Queen’s Hall from 24th June 2013. The series also marks the launch of a companion double-CD of the same name, which will be available from the end of June, and a full year of planned anniversary events, including performances, workshops, exhibitions, and documentary features.

All past members interested in singing the two special anniversary numbers with the choir for July’s Landmarks series should send a message to email@marionetteschorale.com indicating their interest and the years during which they sang with the group no later than Sunday 16 June, 2013. Music and more information will be emailed to those overseas. Those without an email may also call (868) 790-1751 to make contact.

Founded in 1963, incorporated as a non-profit organisation in 2005, and sponsored by bpTT since 1972, the Marionettes Chorale is one of the Caribbean's most celebrated choirs, both at home and abroad. In 1995, the Youth Chorale was formed, comprising boys and girls from over 30 secondary schools nationwide; followed by the formation of the Children’ Choir in 2012. Led by Artistic & Musical Director Gretta Taylor, Assistant Musical Director Dr. Roger Henry, Assistant Artistic Director Caroline Taylor, Property Fund Director Susan Dore, and a committee headed by founder member and Production Manager Joanne Mendes, the choirs mount at least two major productions a year, showcasing a repertoire ranging from European Renaissance to Opera, Broadway, Caribbean Folk and Calypso.