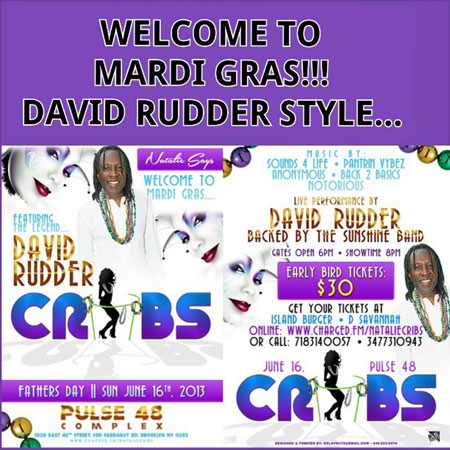 Brooklyn, NY Tuesday 5th June -- On Sunday, June 16th Natalie Lamming promises a very memorable father’s day gift, at her annual Cribs event. Now in its 9th year, Cribs will be even bigger and better as it features a full performance from the legendary Calypso King David Rudder.  Born in Trinidad and Tobago, Rudder is known worldwide as one of the most successful Calypsonians of all times and has been actively performing since 1977.  “King” was attached to his name in 1986 after winning the Young King, National Calypso Monarch title and the Road March title in Trinidad and Tobago. Having released more than 30 albums he is known for many hits including, The Hammer, 1990, Bahia Girl, High Mas, Bachannal Woman and many more. His work has been recognized and released across the globe including Japan where his greatest hits album complete with lyrics was translated into Japanese.

Natalie Lamming is one of Brooklyn’s top female promoters known for her exquisite year-round events including, Shhh, Crave, and Purple Rain.  For 2013 she will transform the popular Pulse 48th venue into New Orleans’s Mardi Gras.  As always she promises a safe and enjoyable partying experience with a premium bar and delightful food court.

To be a part of this year’s Cribs and to party with David Rudder log on to WWW.CHARGED.FM/NATALIECRIBS or visit one of the many ticket outlets to secure your tickets.