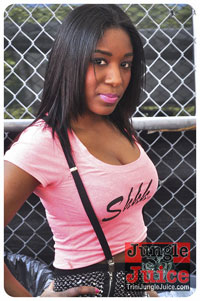 We expected way more action from the Ssshhh crowd.  We had the best weather for the week, the music was great, but plenty people got dressed up to stand around and stare at one another. However, the front end of the crowd had the most action going on in front of the stage. And the real 'gettoners' ensured to have a good time from beginning to end.

The real vibes started around 7:45pm when the performers hit the stage. Shal Marshall and TC took the stage performing some of their biggest hits to get the crowd going, followed by an appearance by Ravi B, who turned up the heat with a few rum tunes and some chutney to spice it up, followed by Mr. Nutron. Lyrikal started the real 'ting ting' with "25/8", and "Nothing Under" - which caused a whinin' session on stage .... Have Mercy On Us! That was only the warm up!!

Blaxx made everyone spread their hands and the crowd really started to wake up as he hit them with tune after tune after tune.... he even took a break to show his skills with a little Bruno Mars cover, but that ended quickly and he was right back into the groove of things. So versatile!

Surprise guest, Benjai took the stage and mash up the yard with EVERY SINGLE TUNE in his discography. Real swanky vibes as he performed Feter, A T E A O, Amnesty, Whine To The Side, Trini and People's Champion... The fete was over after that!