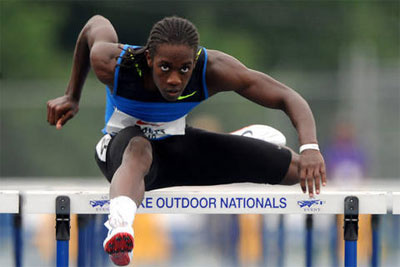 2012 Olympic hurdlers Mikel Thomas and Wayne Davis II both made their country proud with stellar performances on Saturday. Thomas set a new national record of 13.17 in the 110m hurdles at the Star Athletics Sprint Series in Montverde, Florida while Davis became the NCAA 110m hurdle champion with a time of 13.14. Davis’ time did not qualify as a national record because of a wind speed of +3.8.

Davis joins a select group of Trinidad and Tobago athletes who are also NCAA Division One Champions. The Texas A&M junior captured the title on the final day of the college championships event on Saturday in Eugene, Oregon. Trinidad and Tobago’s Sparkle McKnight was also in winners row at the NCAA Championships, running the second leg of the 4x400m relay for Arkansas. The team passed the stick around in 3:27.09. Sparkle is a junior at the southern college and was part of the 2012 Olympic contingent in London.

The Honourable Anil Roberts, Minister of Sport extended congratulations to Wayne Davis and Mikel Thomas on their achievements, saying it augured well for the upcoming National Championships. “Wayne as well as several other young athletes like Sparkle McKnight and Deon Lendore are showing their promise and potential to become world-beating sprinters for many years to come. Our athletes have always done well on the US college circuit. Moreover, the World Championships in August should prove to be a coming out party for many of these athletes who have achieved the qualifying standards. The future of track and field for Trinidad and Tobago is still on good legs and we wholly support their individual efforts to excel.”