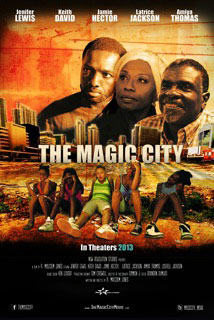 (Miami-Fl-) -- Film Life, Inc., is pleased to announce that two local Miami filmmakers, Edson Jean and R. Malcolm Jones, have been chosen to compete in the Narrative Competition and the HBO Short Film Competition of the 17th Annual American Black Film Festival (ABFF). Additionally, the ABFF in partnership with the Southeast Overtown Park West Community Redevelopment Agency (SEOPW CRA) and City of Miami Commissioner Michelle Spence-Jones will announce their 2013 programming initiatives during the acclaimed festival, which annually draws upwards of three thousand film, television and entertainment industry professionals and celebrities from across the country. The Films Over Miami Showcase, featuring films of Miami’s emerging filmmakers, will take place on Sunday, June 23, 2013, from 10:00am-3pm, hosted by Culturist, Ingrid B of BSide Entertainment. The showcase will open with a special poetry presentation by this year’s ABFF ambassador, actor Omari Hardwick. The films that will be screened include: Welcome to Miami (Elijah Wells), The Heart of  Summer ( Adrian Allen ),The Haitian Guantanamo Bay Experience: The Legal Journey (Rachelle Salnave); The Advenutres of Edson Jean and Magic City (Malcolm Jones).

“As part of its ongoing mission to celebrate the finest that independent cinema has to offer while nurturing up-and-coming talent, the American Black Film Festival is very excited to showcase the works of these two very talented filmmakers, as well as give a platform to Miami’s emerging filmmakers,” said Jeff Friday, CEO of Film Life, Inc., and ABFF Founder. “We have had a partnership with the SEOPW CRA for the past four years and Films Over Miami is the product of this partnership,” Friday added.

The ABFF-SEOPW CRA partnership and Community Showcase initiative was launched in 2009 with the goal of promoting Miami’s local film industry talents and the Southeast Overtown/Park West Community Redevelopment Area to prospective investors and festival attendees alike. This year, the showcase will engage local youth in the ABFF by providing information on career opportunities that exist within the motion picture industry.

The lineup of activities scheduled during this year’s ABFF in conjunction with the ABFF-SEOPW CRA partnership include:

Tickets are currently on sale until June 15, 2013 to the general public at http://www.ticketweb.com/. For additional information on the ABFF, including the complete festival schedule, please visit www.abff.com

About ABFF
The American Black Film Festival (ABFF) is a five-day retreat and international film market dedicated to strengthening the Black filmmaking community. Established in 1997, the core mission of the ABFF is to promote cultural diversity within the motion picture industry.  Through its film showcases and special contests, it annually introduces the top echelon of emerging artists to the film and television industry.

The ABFF is a property of Film Life, Inc., a multifaceted entertainment company headquartered in New York City. The company was founded in 2001 by Jeff Friday, a veteran of the consumer product marketing and advertising industries. While best known for creating the American Black Film Festival, Film Life’s operations center on developing/licensing innovative content across all forms of media and providing strategic advisory services to a wide range of companies in the entertainment, media and consumer product industries.

The American Black Film Festival will be held June 19 - 23, 2013. Festival passes and tickets are available for purchase at http://www.abff.com/festival/buy/passes-and-tickets.php