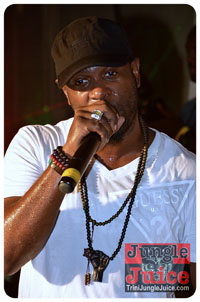 For the second year in a row, DJ Stephen has been able to capture more than just his audience. An Atlanta native for many years, Stephen has been able to mobilize his troops and then some. This time around, it was for the 'Anti Stush' event featuring 2013 most popular soca artist BUNJI GARLIN. And in true fashion (literally) the 'Differentologist' did not disappoint! And though Stephen may believe that the odds were against him, the proof was in the crowd. The odds were actually in his favor!!! ANTI-STUSH... was a fantastic event!

CROWD:
The crowd was of a large size and had a cross section of people. Well dressed, good-looking and ready for de road!! Even Mr. 25-8 (Lyrikal) decided to show his face.

VENUE/ACCESSIBILITY:
Having been here before, I knew what to expect from this venue. Some places were a bit tighter than others, but certainly manageable. However, after DJ Stephen put his finishing touches on it, the place looked very classy and gave the artistes some freedom from the 'backstage jumpers.' The stage was fit for a prince but probably not his entire army. And thankfully, that's all Bunji needed ... just a lil' room, enough to move around and get the entire audience's attention.

VIBES:
From the beginning to the end, the audience was all into the music by DJ Stephen aka Da Professor, Seyi Kay and Smiley, Big Kat sounds, DJ Nesta and DJ Hotness and more. The place was moving, jumping, shaking and invigorating!! Bunji, followed up his fantastic Carnival season by burning thousands of calories on stage. He worked hard and the audience loved him! We have the photos to prove it!! Both Bunji and DJ Stephen, received lots of love from the audience.

FOOD & DRINKS:
First of all, there were free beers.... did you guys hear me??!! I said there were FREE beers! That's big time. Secondly, there was not much of a bar, but everyone was able to get a drink or two. As for the food, I eat a piece of..... get this....."rabbit!" Shhhhhhh doh tell nobody! Moms, all ah could say is bessss pot! My foot was too short for the curry!

SERVICE:
As always, DJ Stephen goes out of his way for all his fans, followers, patrons, artists etc. He is well liked because of his humility. We feel no different. Over the years, Stephen has built a good name for himself and his music customer service speaks volumes. Thanks to you and your support staff Stephen, from TJJ.

COST/VALUE:
This event had an early bird price tag of only $25.00 and $30 afterwards. It's carnival season... so with this type of price tag, that's good!

In 2012, DJ Stephen had one event... I AM SOCA. This year, he had two and had his hands in a third. We can say he is on the rise as a promoter. With his event Anti Stush, DJ Stephen captured a bit of everything. He's coming to come. The event was well attended, the music was good, the cost was reasonable and the artist was top of the line! Not a bad start to the Atlanta Carnival weekend.

Joy Juice... Out and About!