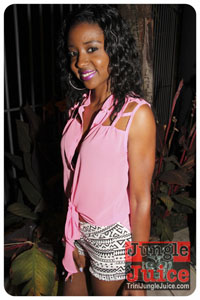 The promoters definitely followed the theme of this party: PURE. Excitement from beginning to end with pure vibes, pure energy and pure niceness.  Can I say PURE provided a different-ology approach to fog up the place by going one hour and…one extra dayyyyyyyyy? Yes, Mr. 25/8 Lyrikal and the Grand Marshall of Hollywood Carnival, Machel Montano alongside Mr. Differentology, Bunji d gyal dem dahlin, were most present from early in the fete which gave patrons enough time to pose with them, take photos, chit-chat and enjoyed the atmosphere of having all these celebs under one roof for the first time in California. Extra points for promoters: LACF, Regulaz Entertainment and Poundaz Int'l.

CROWD:
Disc Jockeys such as Stephen, Eternal Vibes, D’Enforcas and Hyperactive Sounds graced the turntables and blessed the patrons with an abundance of excellent Soca songs stemming from new to throwbacks which targeted the various age groups within PURE. The non-stop playlists, beat matching, track selection and chosen mixes, alongside the energetic voice of Giselle D’Wassi One, was second to none. DJs interacted with the patrons and with fine motor control of the fingers and hands, they manipulated the mic and decks without missing a beat.

VENUE/ACCESSIBILITY:
The venue offered an intimate setting on the outside with tables, the Bar and the Hula Girl margarita tent. Patrons refueled, caught up with friends/family, acquaintances, flirted, posed, took pics and rested their sore feet before returning to the  bacchanal on the inside stage-side.  PURE offered a happy balance between relaxation on the outside to bacchanal and action on the inside.

VIBES:
Screams were heard as soon as the popular words "We ready,  we ready, yeah we ready, we ready, yeah we ready, ready, ready" blasted from the speakers surrounding the venue alongside the guitar notes as the Soca Viking Bunji Garlin hit the stage for the first time ever in Hollywood. He gave a great performance as expected which included his past and present soca anthems including his new tune Carnival Tabanca much to the delight of the crowd. Partygoers came prepared with rags and flags to represent their countries: St.Lucia, St Vincent, Jamaica, Panama, Barbados, USA and of course Trinidad and Tobago to name a few.  A sea of flags can be seen overhead upon command by the Soca Viking whilst adrenaline pumped through veins feeding the gyrating waistlines. Patrons were too engrossed in the euphoric atmosphere to realize or care that their drinks were being spilled with each movement. Partygoers sang along and never missed a beat as Bunji belted out tune after tune sending them in a frenzy. Definite Zumba workout prior to the parade the following day.

FOOD & DRINKS:
Premium top shelf drinks to beers were available.  Bartenders were quick and served the patrons within minutes. Chit system at the entrance allowed the lines at the bar to flow easily and without the dreaded “traffic jam”. Well-stocked bar and drinks flowed till 2am: *** That’s California and the dreaded regulations unfortunately**** Oh how I miss the regulations in TnT... oh wait a minute... there aren’t any there!!!

SERVICE:
Street parking as well as a secured parking lot for a small fee was available. The venue was located next to the Staples Center so parking was never an issue. A tour bus located directly outside the venue alerted patrons of celebs on the inside. Bathrooms were constantly monitored and restocked. There weren't any lines to use it which could also be due to the absence of mirrors. Note for next year, please supply a mirror or two for quick touch ups and the ever present bathroom pics.... thanks in advance.

All that's left to say is if you weren't there, your loss. Looking forward to PURE 2014!

Did we miss anything? Add your 2 cents below...