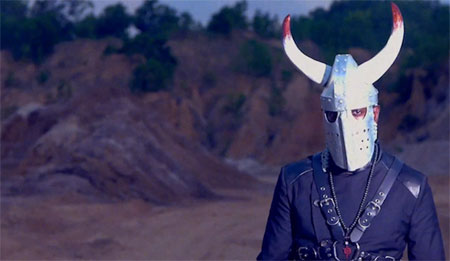 Soca sensation Bunji Garlin has already established “Differentology” as the biggest hit of the 2013 Caribbean Carnival season. Now with a stellar video, a blazing Major Lazer remix and nearly a million YouTube song views later, it is evident that “Differentology” is likely to become a global hit for the Trinidadian artist, who is currently recording his new studio album on VP Records.

“Differentology,” which is featured on Soca Gold 2013 (VP) and available now on iTunes, has been picking up momentum on YouTube. The track alone has garnered an accumulation of nearly a million views, since it was unleashed in February 2013 at the beginning of the Carnival season.  In addition, the song’s colorful eye-popping music video, directed by Nigel Thompson, has been circulating the blogosphere and causing quite the frenzy.

Check out the video here:


The Guardian (UK) is already calling it 2013’s “essential summer jam,” raving that “Differentology is a carnival, a street party, a beach rave: it's every one of your perfect summers distilled into four minutes and 20 seconds." The genre-bending song also caught the attention of Major Lazer, who immediately jumped on the remix. The song (which is featured on Major Lazer’s SoundCloud) is currently the DJ supergroup’s go-to track to open all their live shows and has helped fuel the buzz to a crossover audience.

Born Ian Anthony Alvarez, Bunji Garlin is a Trinidadian artist and international soca royalty known for his high-energy stage shows and lyrical confidence and eloquence. He is both a composer and performer of soca and ragga soca. The latter is a blend of soca with dancehall music that he made his own during the start of his career in the late ‘90s. He has won the “Ragga Soca Monarch” competition in both 2000 and 2001, the Young King title in 2001, the coveted title of International Soca Monarch in 2002 and then reclaimed this title for three more years. Bunji Garlin is currently in the studio working on his new album, set to be released on VP Records. The upcoming release will be his first full-length album on the label since 2007’s Global.

Throughout July and August, Bunji Garlin will perform at select cities across the Caribbean, Canada and United States. See full tour schedule below.