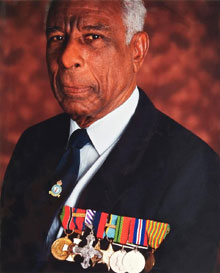 PORT-OF-SPAIN, Trinidad (July 11, 2013) - A documentary film inspired by the life of West Indian war hero, jurist and diplomat Ulric Cross is scheduled to be released next year by the award-winning Caribbean filmmaker Frances-Anne Solomon.

Addressing an audience packed into the Trinidad and Tobago High Commission in London last month, Solomon announced that Justice Cross, "a hero for all time", will be the central feature in the 75-minute documentary which also highlights the accomplishments of fellow Trinidadian legends George Padmore, C.L.R. James, Henry Sylvester Williams, Learie Constantine, and Jamaican Una Marsden.

From an ordinary Belmont childhood in colonial Trinidad, Ulric Cross vaulted the barriers of color, race and class to realize his extraordinary destiny.

The most decorated West Indian Squadron Leader of World War II, Cross was a navigator with the elite Pathfinders Force of Britain's Royal Air Force and was awarded the Distinguished Service Order for meritorious service during wartime combat; and the Distinguished Flying Cross for heroism and extraordinary achievement while participating in aerial exercises.

After the war, he trained as a lawyer, worked as a producer at the BBC, then went on to shine in key advisory roles in three newly independent African States - as a trusted advisor to President Kwame Nkrumah in Ghana, as Attorney General in Cameroon, and as an advisor to President Julius Nyerere in Tanzania.

He returned to Trinidad to serve his country as judge, mediator and diplomat, before heading back to Britain as T&T's High Commissioner in the 1990s. In 2011, Ambassador Ulric Cross received The Order of the Republic of Trinidad and Tobago, the highest honor of the twin island Caribbean state.

Reflecting on Ulric Cross' accomplishments, acclaimed actor Rudolph Walker, the film's UK Patron, stressed the importance of role models. "We need to tell our stories especially for the benefit of our young people and the generations to come," said Walker, whose Rudolph Walker Foundation provides theatrical training to inner city youth in the UK.

Cross' nephew Felix Cross, a composer and theatre director, explained "as a young man, Uncle Ulric inspired us all because his life spanned key moments of the 20th Century: the Second World War, the rise of Pan Africanism, the birth of Independence in Africa and the Caribbean, the emergence of powerful Black Leaders across the Diaspora, and the coming to voice of Caribbean societies."

"HERO explores not just the life, but also the dynamic and transformative times that Ulric Cross was born into, and starred in. Ultimately, the film is about us, who we are as Caribbean people and as citizens of the world," said Frances-Anne Solomon.

Republic Bank of Trinidad and Tobago has joined the project as title sponsor.

Interviews and dramatizations have already been filmed in Trinidad. Over the next few months, the HERO team will recruit actors, crew and partners to shoot in the UK.

About Hero Film Ltd.
Hero Films was established in 2011 to realize the dream of late Senior Counsel Desmond Allum whose passionate desire for a documentary in honor of Ulric Cross is now being achieved by a group that includes attorneys Tara Allum and Rajiv Persad, Dr. Jackie Sharpe, executive producer Anne Marie Stewart, and associate producer Nicola Cross.

About the co-producers
Visual Art and Production, led by Timmy Mora, is a forerunner of video production in Trinidad and Tobago with more than three decades of experience in corporate and commercial production, documentaries and drama.