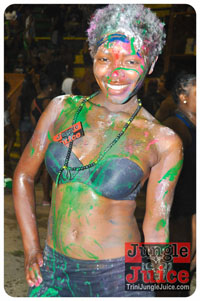 Talk about water, HCF brought 20,000 gallons of water this year to dirty up di crowd! And IF you think you can handle J'ouvert they asked you to bring your own mud, paint and powder!

CROWD:
When I say J'ouvert was held at a Rodeo and there was no room to move, you understand the amount of people that were there. It was expected to have 30,000 ravers and I believe their numbers weren't lying!

VENUE/ACCESSIBILITY:
Venue size fit all it needed to. It even had stands to sit in if you didn't want to be in the middle of the madness!

VIBES:
When special guest artist Tallpree came on, he was mashin up di place with his Jab Jab crew! They started their march from outside the arena and worked their way in and through the crowd holding the Grenada flag, wearing Viking helmets, shooting fire and carrying a pig!! They ended in front of the stage as Tallpree was performing and made the crowd go madd! ""Ya mad ah what!"

Music played by DJ Playboy from Dallas, Bashment Yute, Fire Kyle, DJ Stephen from Los Angeles, DJ Avalanche, Eternal Vibes from Miami, Mikey Faith Sound and last but not least, DJ GT Mayne from 98.9 The Box. They not only played the best of Soca but brought out the best chunes of Dancehall, Reggae and Hip-Hop.

FOOD & DRINKS:
Vendors were wrapped outside of the Rodeo arena with food from all over the Caribbean! Nothing was missed when it came to finding a good meal!