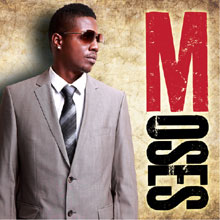 Port-of-Spain, Trinidad. July 16, 2013 -- This week, airwaves across the length and breadth of Trinidad and Tobago will echo simultaneously with the sound of one artiste’s voice. The brand new release of the single that promises to epitomize the changing tide of Devon Moses, known best as Fadda Moses by most, is likely to turn heads. Branding and imaging of the artiste, ‘Moses’ will also take on a new dimension as he permanently drops the “Fadda” handle and establishes himself proudly as simply, Moses.

In recent weeks, some very strategic moves have been made to ensure of Moses’ success as he moves to capitalize on career highpoints thus far. His membership within the Millionaire Family, managed by John Michael Alibocus, best known as Makamillion, has been amicably dissolved in part- as there have been assurances that Moses will certainly perform with the musical team at certain events, once requested. Now, under the new management house of Blanco Management Services or BMS, Moses is carded to release his first summer holiday hit- a track called, “Sample”.

Moses’ dynamic flavor and his ability to freestyle, complete with some interesting mouth movements that have been known to catch the attention of audiences, makes him an automatic favourite among the youth audience, but as his marketing campaign moves full speed ahead, manager, Damien Nesbit assures that Moses will be moving to engage audiences of all age groups. “He is very talented and versatile and the likelihood of seeing grown ups bobbing their heads to his music, isn’t far fetched.”

Nesbit says by capturing both the youth audiences and the mature crowds, Moses’ appeal will undoubtedly go beyond age limitations. “Why should any artiste be limited? Jamelody’s music is enjoyed by adults and youths alike, likewise, JahCure and even Buju Banton so there’s no reason why all artistes shouldn’t enjoy that type of recognition,” he highlighted.

Branding Moses is another aspect of the promotional and marketing strategy that’s being carefully thought out. From his wardrobe to his social media presence, Nesbit says there are plans to ensure that every aspect of the artiste’s forward progression is carefully structured.

A number of singles have already been recorded and videos are said to also be in the making as under this new management umbrella, Moses will likely release videos simultaneously with songs. “New media affords for better promotion of all artistes, from Trinidad to Norway to the USA and certainly Europe. Thanks to the Internet there is opportunity for artistes from any part of the world to be discovered- but of course that comes with proper marketing and strategic promotion,” said Nesbit.

Moses will not be one dimensional, according to his new management. There are plans to pair him with numerous producers and even writers. “We plan on seeking out new writers so that his sound evolves constantly. Working with different producers will also help in showing off Moses’ true versatility.

The new single, “Sample” was produced by Millbeatz Entertainment and written by Moses. Its strong dancehall flavor is felt throughout, but the strength of Trinidad and Tobago’s dialect cannot be missed since at no point does this young entertainer change his dialect to persuade his audience. In the days ahead, Nesbit and the team will be promoting the single heavily across T&T. They are also assuring that Moses will be unleashing new singles in the lead up to Trinidad and Tobago’s Carnival 2014 season, in the months ahead.