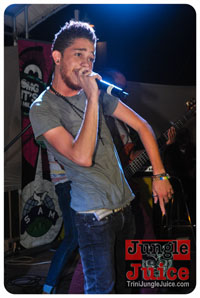 Have you ever had an eargasm? If not, then you’ve probably never heard 5 Miles to Midnight (5M2M). The band rocked out to an enthusiastic crowd on the Woodford Café Chagaunas patio, giving us a taste of what’s to come. The show was exciting from start to finish as the band kept the audience on their toes by delivering a tight set that included electrifying original singles off their upcoming EP, vibesy covers and guest performances by other talented upcoming artists.

T & T is not at all lacking for talent and this was evidenced by the awesome line up at the show. New acoustic duo The Indoor Kites opened with a harmonious delivery of Sade’s “Sweetest Taboo” and an equally smooth original composition. This set our expectations high for a great show and we were not disappointed.

5M2M took the stage next and took the energy to a whole different level with their fusion of rock and Caribbean music influences. The band has coined this original genre of music Island Rock or iRock and it sounds just like Salted Caramel ice-cream tastes, sweet with just the right amount of salty goodness.

Lead singer Liam King’s powerful vocals were complemented by edgy music as they rocked the crowd with their recently released singles “Control” and “Don’t Regret” among other selections. The band has managed to perfectly balance the bold and even aggressive qualities of rock music with the soulful, rhythmic nature of our regional genres. This topped off with the youthful effervescence of pop music and plenty energy has resulted in a fresh, dynamic sound that is raw yet accessible, and frankly infectious.

They were joined on the stage by the talented duo Nebula868 who had the crowd jiggling and fist pumping respectively with their new song “Peep Show” and their party anthem “Amped Up”.  Mark Hardy and Yung Rudd kept the vibes on high with their new release “Pumpin’”. King Kong even joined them on stage to show just how much vibes the song has.

The gig attracted a diverse crowd of music lovers who definitely got their money’s worth. Despite it being midweek, the patio was full during the show and from the look of things the audience definitely enjoyed themselves. The outdoor setting at Woodford Café provided great ambience for an exciting night.

All in all the show was the perfect example of the limitless possibility of Trini talent and what we can and will bring to the world stage in the near future. It’s extremely inspiring to see young people going after their dreams and producing a world class product. We anxiously await the release of 5M2M’s first EP.