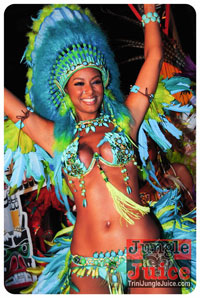 It's been ten years TRIBE has been around with their vibrant colors, fresh and new concepts in costumes, and satisfactory services to all their masqueraders. As far as costumes were concerned, they believed it was time for a rebirth.

Rebirth comes from the beginning; the origins, remembering where you've come from in order to know where you are going. TRIBE took this journey ten years ago, and they believed it was time to go back.

BLISS also paid homage to their past contributions by reintroducing each iconic costume from the beginning to present, so masqueraders got a chance to relive their memories in their favorite TRIBE costume. 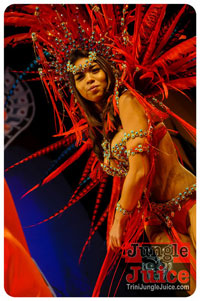 Now TRIBE's costumes portrayed the real tribal feel, with big feather headpieces and I believe females won't have to worry about glitzy rhinestones and makeup because it's all about the war paint!! Their opening presentation wowed the crowd in attendance and their models had everyone saying "Yes, I will be there 2014." Call me 'Chief Wine Down Low' because I also was intrigued and impressed by the decor and ambiance they had at the venue.