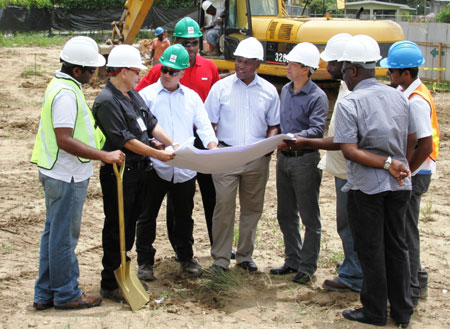 The community of Santa Cruz will soon benefit from a refurbished recreation ground as work recently commenced on the upgrade of the facility named after the community’s most famous son and world cricket legend Brian Charles Lara.

At a site visit for the media last Friday, Councillor for the area Lyndon Lara said he was grateful for the recommencement of works as there is a wealth of cricketing talent in the area to be developed. Resident Michael Chan Tack also stressed the importance of having a recreation ground equipped with the facilities to encourage regular use of the ground by athletes and persons who want to keep fit.

The Sports Company, guided by its mandate to upgrade and refurbish recreation grounds across Trinidad and Tobago is the project manager at the Brian Lara Recreation Ground. The works commenced in July 2013 and should be complete in six (6) months. Among the works to be completed at the facility include:
The first phase of works is focused on the pavilion, which was the backdrop for Friday’s media event. When completed, the ground, which is frequently used by the community, will be able to accommodate several sports – cricket, football, basketball – as well as community events such as family days, concerts and large gatherings.