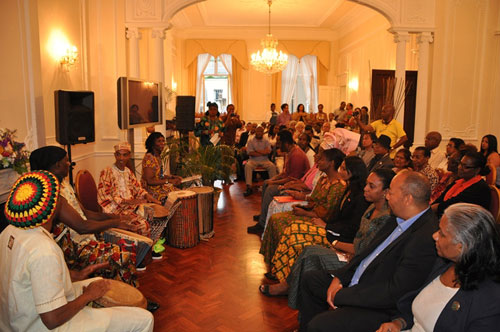 The atmosphere was euphoric on Wednesday 31st July when the Trinidad and Tobago High Commission hosted its annual Emancipation celebration. The packed audience was buzzing with excitement, as guests were treated to a medley of artistes whose performances brilliantly displayed the vibrancy of Trinidad and Tobago’s strong African ancestry.

Mrs. Reshma Bissoon-Deokie, Acting High Commissioner, relayed a stirring opening speech to the gathered crowd of Trinidadian and Tobagonian nationals. “In Trinidad and Tobago, the beauty of our multi cultural society is that we all come together to celebrate the triumphs and mourn the struggles of our countrymen, regardless of creed and race,” she stated. Mrs. Bissoon-Deokie paid tribute to the numerous Trinbagonian nationals of African descent who had made profound contributions locally and globally, such as C.L.R. James, Dr. Eric Williams and Audrey Jeffers, as well as George Padmore and Stokely Carmichael who both significantly impacted international race relations. “It is important that we reflect on their stories and achievements,” she said, “as they are proof that although we may hail from small islands, we certainly possess the power to effect change on a global scale”.

High Commissioner Garvin Nicholas joined the proceedings in spirit, as guests were shown a video presentation of Nicholas’ outreach trip to Liverpool, where he visited the International Slavery Museum. “What I have seen here has given me a completely new perspective on the Trans-Atlantic Slave Trade,” he reflected. “To have gone through centuries of the most horrific abuse and to have not only survived, but thrived, shows an extraordinary strength”.

The mood of poignant reflection soon turned to one of total jubilation, when the Caribbean Master Drummers took to the stage. The Drummers worked the crowd into a frenzy with the powerful rhythms of their African drums and had guests moving and clapping. The audience was again intensely enthused by the next performer, Ms. Jeanelle Archer, a Trinidadian student. Archer delivered a passionate monologue titled “My Redemption Song”, which expressed the struggle and celebration of her African legacy through song and spoken word.

The evening came to a thrilling close with the final performance by Sheldon Blackman. Blackman’s robust vocals and lyrics exhorting universal love and victory over oppression struck a deep chord with the audience, who sang along at the top of their voices. Blackman’s original songs had the audience enthralled, but his performance of his father Ras Shorty I’s legendary tune “Watch out my children” evoked a great sense of nostalgia and unity from the crowd which was extraordinary to witness.

The Trinidad and Tobago High Commission regularly hosts cultural events, and the Emancipation celebration is one which nationals particularly look forward to. As the evening drew to an end, guests expressed their delight and appreciation for the Mission’s fantastic celebration of an important element of Trinidad and Tobago’s heritage.