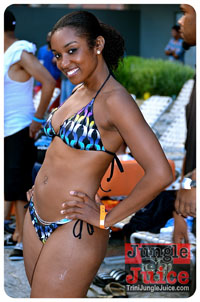 Hookie...Hookie...Hookie....hummmmm, what can we say about this event? Well to start, not even a few drops of water (actually a lot) from the heavens could stop this event from being one of, if not the best "HOOKIE" yet! As a matter of fact, the people we saw running outside, were just going to put their phones away. Hookie is clearly the best day party there is around the DMV (DC, MD and VA) area. Without a doubt.

With the events kicking off at 12noon...many people have good reason to call in sick, or to not return from lunch, or to not even go into work. They took the day since last year!

From ice fountains to fruit laden women, to women in the sexiest bathing suits...this event had every man's dream, literally at their fingertips. The crowd was just as good as it was last year...but bigger, better, sexier. People had a great time from the moment the clock struck 12!

Hookie was held at the Capitol Skyline Hotel in downtown DC. Great for this event. Open access to pool area, good decor and lots of space to party. Even the party room was sufficient for those who did not care to brave the rains.

The vibes at this event was never ending and the top of the line DJ Cast made certain that the music never had a break. DJ NuNu the Heartbreaker, DJ Stephen, Half Krazy, DJ Hazzard and Mystic Vibes ensured the crowds pleasure by keeping the vibes to a maximum.

Drinks and food were both on point. I must also make special mention of the Jerk Ckicken. My oh My!

As far as the service, as usual, the Mystic Vibes and Darkwater Ent. staff, have been top of the line. They did a great job in pulling off another Hookie in succession. TJJ was happy to be there.

Hector and crew, great job! We are looking forward to Hookie 2014 for sure!